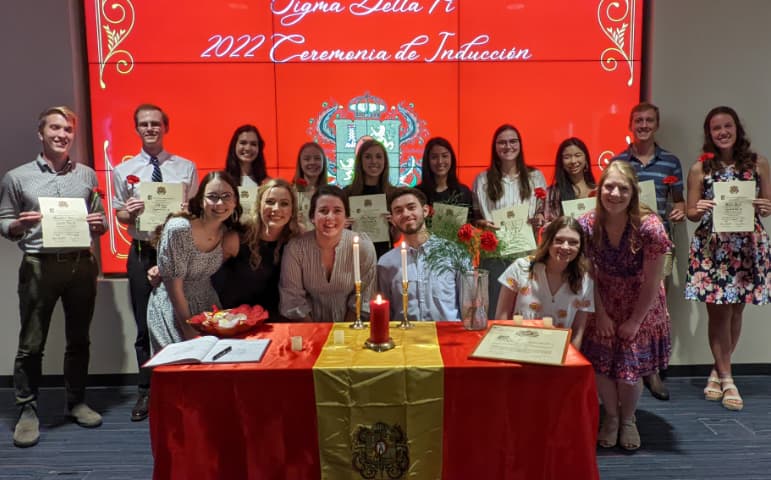 On April 21, 2022, 10 Samford students pursuing Spanish minors and majors were inducted into the Delta Nu Chapter of Sigma Delta Pi, the National Collegiate Hispanic Honor Society. Established in 1959, Delta Nu is the Samford University chapter of the national society and the oldest chapter in the state of Alabama.

“We are incredibly proud of these students, as this national honor society has very high standards for membership,” said Dr. Dieter A. Waldvogel, Assistant Professor of Spanish and Delta Nu Chapter Advisor. “The fact that we inducted 25 students last year and another 10 this year speaks highly of the caliber and competence of students pursuing Spanish language degrees here at Samford.”

Students must have completed at least three years, or the equivalent, of college Spanish, including at least three semester hours of a third-year course in Hispanic literature or Hispanic culture and civilization. They must have an overall cumulative GPA of at least 3.20 and be a junior or senior in a college or university with an active Sigma Delta Pi chapter.

In addition to the induction of its 2022 class, two student members of the Samford chapter of Sigma Delta Pi were recognized nationally for their academic achievements.

Sarah Westmoreland, Spanish Major and Vice President of the Delta Nu Chapter for Sigma Delta Pi, was selected as a recipient of a 2022 Sigma Delta Pi internship grant among a very competitive pool of applicants and members of the national honors society from across the U.S. Westmoreland will receive a $2,000 grant from Sigma Delta Pi to use in her upcoming summer internship in Seville, Spain.

Lacey Spear, Spanish Major and Chapter President, was a national finalist for the Sigma Delta Pi Mario Vargas Llosa Award which is “granted yearly to one undergraduate Spanish major or minor who has demonstrated outstanding achievement in all upper-division courses completed and exemplary involvement in extra-curricular activities as related to Spanish.”