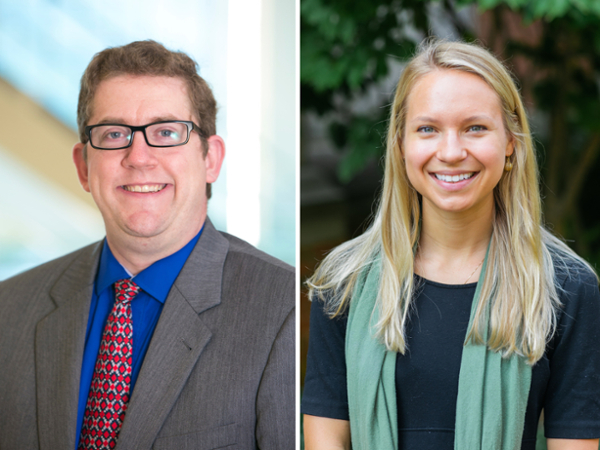 Samford University economics faculty members, Art Carden and Clara Piano, presented their research at the Public Choice Society conference in Nashville, Tennessee, March 11-13, 2022. Their presentations were part of a seminar titled “Faith, Religion, and Buchanan” which marked the 60th anniversary of James M. Buchanan and Gordon Tullock’s 1962 book The Calculus of Consent.
“The Calculus of Consent is a landmark book that started the entire subdiscipline we call ‘public choice’,” Carden said. “It’s fitting to remember it by seeing how the ideas contained in it interact with the obligations of our faith.”
During the session, Piano presented a paper she’s writing with Samford student Anna Claire Noblitt titled “Three to Get Married? Religious Marriage as a Cooperative Game.” Carden presented a paper he coauthored with Jaime Carini, a doctoral candidate at Indiana University, and Nathanael Snow, assistant professor of economics and Ball State University, titled “Discussion, Dictation, and Decisions Among Natural Equals.”
Piano has written extensively about the economics of marriage, the family and religion.
Carden has written many academic pieces about Buchanan, the Nobel Prize winning economist from 1986, including:
Additionally, he wrote an obituary for Buchanan for Forbes.com in 2013 and this piece about his book Why I, Too, Am Not a Conservative.
Samford is a leading Christian university offering undergraduate programs grounded in the liberal arts with an array of nationally recognized graduate and professional schools. Founded in 1841, Samford is the 87th-oldest institution of higher learning in the United States. The Wall Street Journal ranks Samford 1st nationally for student engagement and U.S. News & World Report ranks Samford 37th in the nation for best undergraduate teaching and 97th nationally for best value. Samford enrolls 5,758 students from 48 states and 22 countries in its 10 academic schools: arts, arts and sciences, business, divinity, education, health professions, law, nursing, pharmacy and public health. Samford fields 17 athletic teams that compete in the tradition-rich Southern Conference, and ranks 3rd nationally for its Graduation Success Rate among all NCAA Division I schools.
Marketing and Communications Manager
Morgan Black
mblack3@samford.edu
205-726-4753