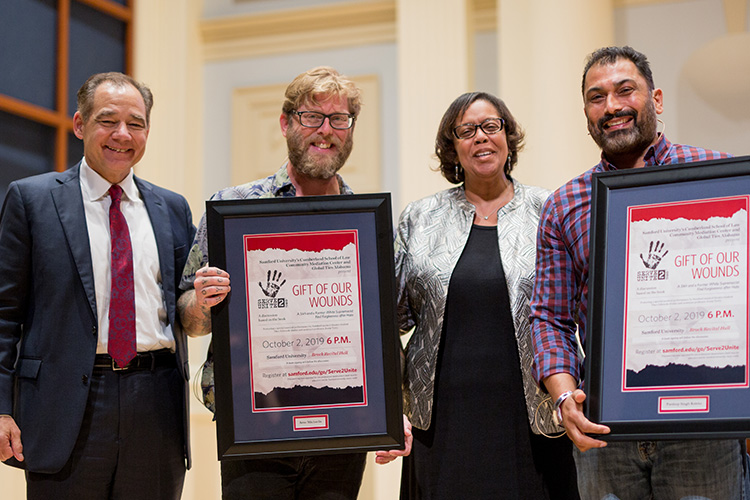 Samford University's Cumberland School of Law’s Community Mediation Center, in partnership with Global Ties Alabama, hosted Serve 2 Unite on Wednesday, Oct. 2. The evening featured a discussion with Serve 2 Unite’s cofounders Pardeep Singh Kaleka and Arno Michaelis, based on their book, Gift of Our Wounds: A Sikh and a Former White Supremacist Find Forgiveness after Hate.

Kaleka lost his father in the Aug. 5, 2012, shooting at the Sikh Temple of Wisconsin; Michaelis, a former white supremacist, helped start the gang that produced the shooter. According to their website, the two formed Serve 2 Unite to “establish a healthy sense of identity, purpose and belonging that diverts young people from violent extremist ideologies, gun violence, school shootings and other forms of self-harm.” Serve 2 Unite works closely with school administrators and educators to facilitate tailored programs on a variety of social issues for students and parents.

“It’s an honor for us to be here to be able to share our story,” Michaelis began. “This trip to Alabama has been especially meaningful because the shooting in 2012 was the deadliest white supremacist attack in the United States since the Ku Klux Klan killed four little girls here in Birmingham, Alabama, at the 16th Street Baptist Church. We spoke at that church this week. When I think of those little girls, I think of how they live on with all of us today as we work towards healing.”

He continued to tell his story of how he became part of white supremacist groups in the 1990s and then how he came out publicly with his story in 2010 as he began his journey towards recovery and helping others heal.

“The most frequently asked question  I get is ‘How did you change?’,” he said. “And the answer to that question is ‘exhaustion.’ I was exhausted of doing things that I knew were wrong.”

He continued to say that no one has been more crucial to his healing than Pardeep Singh Kaleka.

Kaleka joined the conversation to say, “We are a reflection of the society that we create.”

Growing up, Kaleka knew he wanted to be of service. He became a police officer when he graduated from college and now, he is serving people through Serve 2 Unite.

“We get really good at looking out the window at all the problems in the world, but we’re terrible at looking in the mirror,” he said. “This journey has to be self-reflective.”

“It is important for all of us to stop and listen to the real-life experiences of those who have lived through traumatic events,” said Cassandra Adams, assistant dean of Cumberland’s Public Interest Program and director of the Community Mediation Center. “Doing so creates a space for truthful dialogue, which clears the pathway toward genuine understanding and acceptance of each other. “

According to Adams, the event aligned well with Samford’s mission and values. “Samford’s core values include a lifelong commitment to personal empowerment, accountability, responsibility, integrity, honesty and justice,” she said. “It is my hope that our conversation with Arno and Pardeep encouraged our community to remain aligned with those values so that we can live peacefully with one another.”