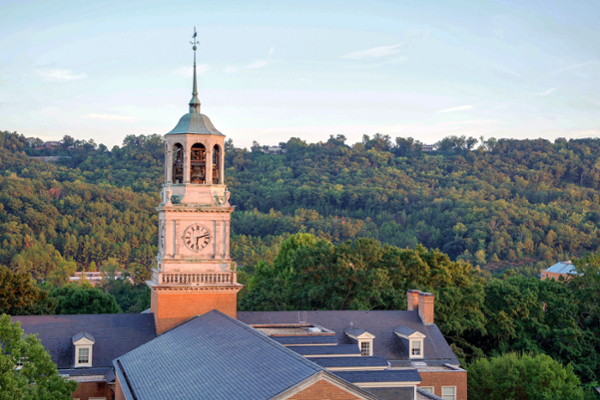 Samford University honored ten students as the recipients of the 2021 leadership and service awards.

Aubrie Strange and Hilton Francine received the Joe McDade Scholarship, which is awarded through the Mann Center for Ethics and Leadership and is given to students who show an outstanding commitment to character, ethical leadership and service to others. The scholarship was established by 1961 Samford alumnus Joe McDade.

Andre’A Roper was named the Omicron Delta Kappa Leader of the Year, which recognizes one outstanding ODK member for exemplary services to its circle and community at Samford. Roper graduated in 2021 with a bachelor's degree in English and is from Sumter, South Carolina.

Micaiah Collins and Taylor Moore-Jones each received the Omicron Delta Kappa Emerging Leader Award, which is given to one male and one female student who exemplifies character, leadership, service and scholarship.

Alan Crisologo and Madeline Guy received the Rufus W. Shelton Community Service Award. The award was established in memory of Rufus W. Shelton, ’32, by Dr. and Mrs. R. Waid Shelton, Jr. The Student Government Association Student Senate selects one male and one female student to receive the award each year. The awardees are individuals who have done the most for the betterment of life at Samford through special sustained efforts.

Crisologo and Hope Dawson received the SGA Career Achievement Award, which is presented each year to one male and one female who have made serving the student body through the SGA a high priority.

Crisologo served as a senator for the past three years and was re-elected to serve again for his senior year. He served as the chair of the Senate Campus Services committee during the 2020-2021 academic year and has been instrumental in continuing to build strong relationships with Samford administrators.

Dawson, who is from Birmingham, Alabama and graduated in May with a bachelor's degree in journalism and mass communications, most recently served as the SGA president. She previously served as a freshman senator, the sophomore class president and the vice president for senate during her junior year.

Dawson also received the Gail Hyle Memorial Award, which is awarded to the woman in the graduating class who best exemplifies Christian character, leadership, school spirit and service, and the James M. Sizemore Award, which is given to a person in the senior class who has best demonstrated character, personality, scholarship and unselfish service to Samford.

Bailey Deavers received the Service Award from the university, which honors a student who best exemplifies the qualities of social service that Margaret Davidson Sizemore demonstrated. Deavers, who is from Danielsville, Georgia, graduated in 2021 with a degree in political science.

Tanner Thompson received the John R. Mott Award which is awarded to a male student in the graduating class who represents high character, scholarship and student public service.

Thompson, a recent graduate from Brock School of Business, is from Spanish Fort, Alabama.