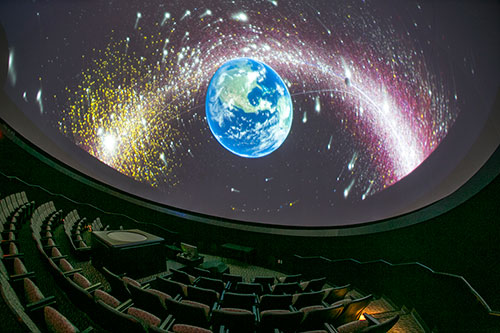 A revival of The Star of Bethlehem, the popular show featured in Samford University’s Christenberry Planetarium, will return to campus Dec. 2-4. The event is free and open to the public.

The Star of Bethlehem examines the Gospel of Matthew which tells the story of the wise men seeing the star of Bethlehem and how it guided them to Jesus Christ. Along with the biblical story, the show will also consider potential scientific explanations for the physical phenomena of the famous star.

“The goal is not to present an explanation, because there is no historical proof that the star existed at all. This presentation is dedicated only to suggesting a narrative in the planetarium that communicates the star as a symbol with a function in the Gospel - a symbol of the deification of Jesus Christ,” said Don Olive, director of the Christenberry Planetarium. “Thinking about scientific explanations does not diminish the spiritual significance and importance of the biblical story, but it's fun to theorize about how God can deliver a sign to the magi, King Herod, the people of Israel, and ultimately to all of humanity.”

The performance was created by and stars Olive, as well as students Caroline Hood, Nolan Waldschmidt and Addie Pace.

The Christenberry Planetarium is on Samford’s campus, which is located at 800 Lakeshore Drive, Birmingham, Alabama, 35229.