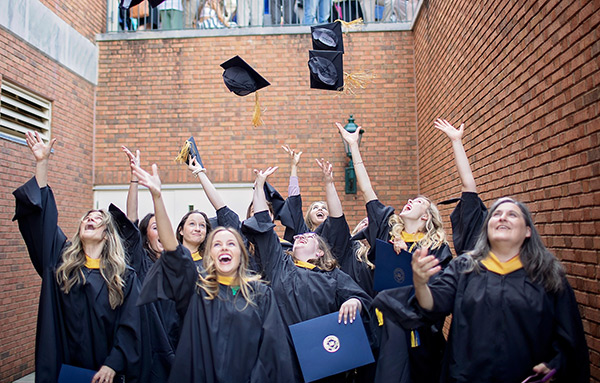 Samford University awarded degrees to 1,287 students during five commencement ceremonies held on campus April 29-30. Ceremonies for Beeson Divinity School, Brock School of Business, Orlean Beeson School of Education and the College of Health Sciences were held on Friday, April 29. Graduates from Cumberland School of Law, Howard College of Arts and Sciences and the School of the Arts were honored during commencement ceremonies held on Saturday, April 30. President Beck A. Taylor presided over each one.

Mark Dever, senior pastor of Capitol Hill Baptist Church in Washington, D.C., gave the sermon during Beeson Divinity School’s Commencement and Service of Consecration. Dever urged the 15 graduates to remember that their ministry is not intended to bring themselves glory, but to bring glory to God.

“The cross is where any claims to our own glory end, and where God’s glory shines,” Dever said. “Brothers and sisters, the whole purpose of our redemption is the eternal purpose of God—to glorify him.”

David Little, retiring associate professor of teacher education, spoke to graduates of Brock School of Business and Orlean Beeson School of Education, where he encouraged them to follow three rules: be financially responsible, be active in the community and represent Samford well through your actions and character.

Scott Bickel, professor, director of scholarship and service, and director of the Office for Faith and Health in the School of Health Professions, delivered the keynote address to graduates of the College of Health Sciences.

On Saturday, 285 students graduated from Howard College of Arts and Sciences and the School of the Arts. Dennis Samson, retiring professor and chair of the Department of Classics and Philosophy, gave the commencement address where he urged graduates to be forces of restoration in the world, especially during a time of war and political uncertainty, and to display the hope that the Lord has the last word.

Cumberland School of Law awarded 143 juris doctors degrees to its graduates. Birmingham Mayor Randall Woodfin, who graduated from the law school in 2007, was the keynote speaker and asked students to know their “why” for becoming lawyers.

“Standing on this stage I can’t tell you your why because each of your journeys is different, but I can tell you how to achieve it. You achieve it by connecting with the communities you serve and by finding and digging deep for your passion. You have to realize what motivates you; let that drive you forward. You achieve it by being your real authentic self. You also achieve it by embracing your why, which means your why has to be your truth,” Woodfin said. “I firmly believe that the unarmed truth will never be denied, and the truth will always win. I am confident in that because Cumberland helped me hone my why. It put me on the path to open doors, to protect, to lead, and to serve my community, and I am confident in all of you as well. Let your why be the catalyst of change.”

Three awards were presented to students, including the John C. Pittman Spirit Award, the President’s Cup and the Velma Wright Irons Award.

For an inside look on the commencement ceremonies, watch this video from Samford’s monthly video series called Beck’s Bench, hosted by President Taylor. To view photos from the ceremonies, visit Samford’s graduation album on our Facebook page.