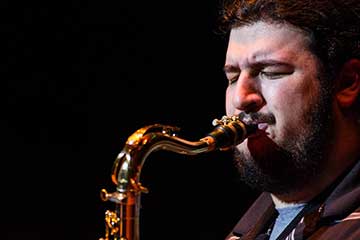 Michael Saddekni is a Woodwind player/teacher from Birmingham who began playing the saxophone in sixth grade at Pizitz Middle School. After having a passion for music, he went to Samford University and graduated in 2013 with a Bachelor’s in Saxophone performance. Wanting to hone his skills even further he continued to University of North Florida in Jacksonville and got a Bachelor’s in Jazz Studies and refined his flute and clarinet playing, and after moved to Philadelphia PA where he got a Master’s in Jazz Studies at The University of the Arts. While living in Philadelphia, Michael interned at the WRTI radio station with renowned radio host and MC J Michael Harrison, and taught at the Philadelphia Clef Club of Jazz under Lovett Hines, one of the greatest jazz instructors in the world, who has taught many famous recording artists today such as Christian McBride, multiple members of The Roots, and Pat Martino. Michael’s passion for teaching has brought him back to Birmingham where he wishes to pass on the knowledge he has learned from his many experiences to the younger generation of his hometown. He is currently teaching saxophone, clarinet and flute lessons at the Samford Academy of the Arts.