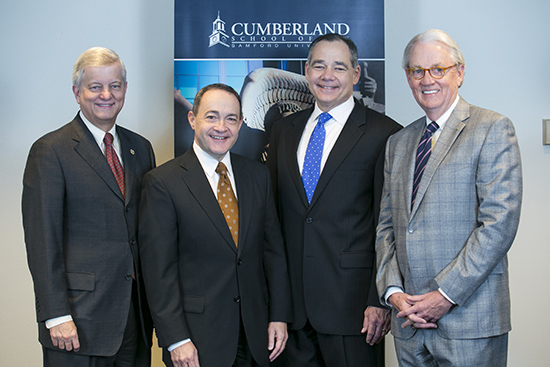 As of the Dec. 31, 2014 conclusion, gifts and pledges totaling $17,208,602 had been received from 2,374 donors, representing the largest fundraising effort in the law school’s 168-year history. The public phase of the campaign ran from fall 2013 through 2014 with the unprecedented goal for Cumberland of raising $15 million. Campaign cochair Stan Starnes said the campaign objectives were to raise funds to support student scholarships, academic programs, and faculty enhancements. Starnes is chairman and CEO of Birmingham-based ProAssurance and a 1972 Cumberland graduate.

“It is an extreme joy to celebrate the successful conclusion of the Cumberland capital campaign conceived in the depths of the recession. Never has it been more difficult in the history of the nation for a law student to secure an affordable legal education” Starnes said. “For this reason, I am particularly pleased that this campaign will afford many students an education at Cumberland School of Law, when in the absence of this campaign, a law degree would not otherwise be available to them.

“The success of the campaign is a reflection of the pride, devotion and affection which Cumberland School of Law graduates and friends have for our law school.”

As a result of the campaign:

“The funds generated by this campaign will make the programs at Cumberland School of Law stronger and more accessible to students,” Strickland added. “I am grateful to the campaign’s co-chairs and executive committee for their hard work and sincerely appreciate every gift from every person.”

The successful Cumberland School of Law campaign was part of the university’s recently completed “Campaign for Samford” that raised more than $202 million.