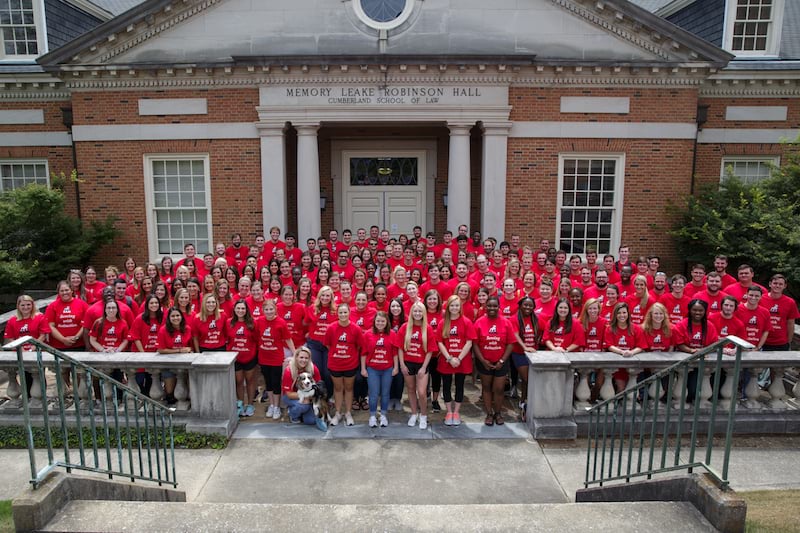 The Juris Doctor class of 2022 is already making history at Cumberland. A record 55% of the class is female, and the group of 159 students is the most academically accomplished in recent years. According to Director of Admission Whitney Dachelet, the median LSAT and GPA for the incoming class has continued to rise along with an increase in the number of students enrolled.

“It was such a pleasure getting to know our students individually throughout the year and observing their excitement upon meeting each other during orientation,” said  Dachelet. “Our admission process was competitive, and we are pleased that the Class of 2022 brought an increased level of academic achievement, without sacrificing enrollment. Our new class is gracious, kind and passionate—the definition of a Cumberland lawyer. We are eager to see all that they will achieve.”

First-year students represent 16 states, eight countries, 53 undergraduate colleges and universities and 42 college majors. They bring with them a variety of experiences including playing collegiate sports, earning master’s degrees, serving in the military, living abroad and spending numerous hours volunteering in their communities.

At orientation on August 12, students heard from 2007 alumna Stephanie Mays, a shareholder at Maynard Cooper & Gale. Mays, who has been nationally recognized for her work in labor and employment law, challenged the students to take advantage of all that Cumberland has to offer. She encouraged students to “get a bigger pan” to make room for the new experiences and responsibilities of law school and to cultivate their reputation and lifelong friendships.

The three-day orientation offered activities to ensure each student’s success and aid in the establishment of lifelong friendships including a picnic with law school faculty and staff and an outing planned by the Student Bar Association.

“This community service activity has been going on for over a decade at Cumberland,” said Cassandra Adams, assistant dean and director of Cumberland’s Public Interest Program. “This is a great way to provide a space for our first-year students to kick off law school by getting into the mindset of public service which is what we, as lawyers, are called to do.”

In addition to the new Juris Doctor candidates, 36 new students started in Cumberland’s online graduate programs. The students represent 17 states and have a wide variety of experiences in law, compliance, health care and financial services. The new students studying in either the Master of Studies in Law (M.S.L.) or Master of Laws (LL.M.) online degree programs represent all four concentrations including financial services regulatory compliance, health law and policy, higher education law and compliance and legal project management.