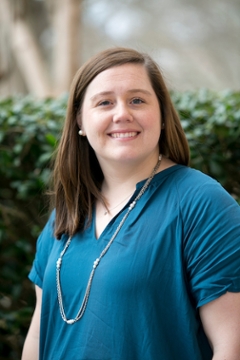 Kelly Jackson received her Bachelor of Arts in Communicative Disorders and Spanish in 2011 from the University of Alabama, and her Master of Science in Speech Language Pathology in 2012 also from the University of Alabama. She began her career as a speech language pathologist working in a skilled nursing facility. Kelly has experience working in many different settings including hospitals, skilled nursing facilities and public schools. Kelly has worked with patients ranging from early childhood to geriatric with various  speech, language, and swallowing disorders. She speaks Spanish and has had experience in conducting speech therapy and evaluations in Spanish in various settings. Kelly is very excited to begin her new role of Communication Sciences and Disorders Clinical Lab Coordinator.