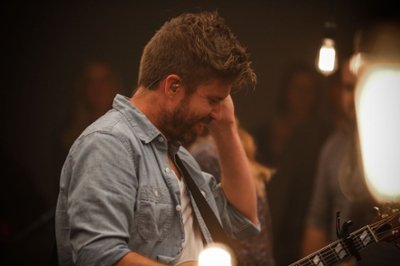 For ages within the church, and even dating back to the nation of Israel, the goal of her leadership has been to reveal to the world the nature and promises of God so that the world, through the power of the Holy Spirit, might repent and believe resulting in true worship. While the means of doing this has remained static through the ages (Bible, prayer, worship, communion, service, gospel community), the style of communication has changed as culture itself has morphed and moved into its various forms. What I am about to say is not an attack on modern culture or even modernity itself. Neither am I saying that the use of modern means and methods of communication are to be anathema within the church today. I am not proposing a move toward the Amish tradition of cart and buggy in order to achieve some sort of aesthetical spirituality that has no bearing on the soul itself. If someone is reading this on my blog you will see the use of modern media to deliver songs and ideas to the church and world at large. These things are tools that are morally neutral in my view. I am also not attempting to shout from the rooftops that everyone is doing it wrong. There are many dear brothers and sisters that are chasing Jesus with everything that they are and attempting to reveal his nature through the gift of song and storytelling. These things are an amazing gift to the church. With that said as introduction, I wish to take aim at one aspect of modern Christian culture.

We are a culture obsessed with celebrity. The Oscars, The Grammys, TMZ, and any magazine cover will provide ample evidence of this reality. It is also an increasing reality that the church has embraced this part of the culture with open arms. Self promotion has become synonymous with gospel promotion. Examples of this abound. Just this week I have seen a Groupon for a night of worship with a major Christian “superstar”, a flyer for a women’s conference led by a current Christian celebrity, and tickets being sold for a Christian Bonnaroo type experience. All the promotion for these events revolve around the personalities that are the “main events”. The Groupon is a hip black and white photo of the artist, the flyer is a picture of the speaker, and the Christian Bonnaroo is a backlit photo of a singer surrounded by thousands of hands and smartphone cameras stretched heavenward. The simple question has to be; what and who are we promoting? I am not questioning the content of these events, rather I am questioning the push and elevation of celebrity status in order to sell tickets and gain a hearing. The content of the Groupon artist’s songs are gospel filled as are the conference speakers books. The issue is not the what, it is the who. God is clear in Isaiah 48:11 that he will not share his glory with anyone, and on the surface of things it seems like a lot of glory is being sought after and shared in the modern church.

I imagine that for some the push back against this will be to say that these people love Jesus and are trying to gain as large of an audience as they can in order to deliver the truth of the Gospel. However, if the means of drawing that crowd are in opposition to the message of the Kingdom itself, is this not self defeating from the start?  A phrase that is often thrown around is “God has given me this platform” as if God is in the business of making people great so that they are more qualified to speak on his behalf. This seems to go against the very core of the Gospel message itself. The Kingdom does not seek to elevate the individual so God can use them, it seeks to humble them so that God himself is elevated through their weakness. The message of celebrity is self elevation and attention. The message of the Kingdom is inclusion and equality in the cross. The message of celebrity is artist circle and backstage passes. The heart of Christ is found in service and self sacrifice leading to his body being elevated on the cross. Paul knew this to be the truth. He battled the “Super Apostles” of his day as they came into the church preaching the gospel with an air of professionalism and superiority. They were the smooth talkers and smooth dressers of the day. Paul pleads with the Corinthian church to reject these men not based on their content but on their self aggrandizement. Speaking about these men he writes...

For I think that God has exhibited us apostles as last of all, like men sentenced to death, because we have become a spectacle to the world, to angels, and to men. We are fools for Christ's sake, but you are wise in Christ. We are weak, but you are strong. You are held in honor, but we in disrepute. (1 Corinthians 4:9-10 ESV)

Paul understood that the power of the gospel was not revealed by flash and awe on the conference circuit but through the work of the Holy Spirit through the average person. God makes sure to point out to Israel over and over again that he chose her not because she was strong and beautiful (meaning that he could really leverage that strength and beauty to get himself noticed), he chose her because she was the weakest among the nations so that his strength could be made evident in that weakness. God is not looking for superstars, he is looking for paupers. Paul himself did not speak with eloquence but lived in the power of the Spirit. Again Paul writes…

For Christ did not send me to baptize but to preach the gospel, and not with words of eloquent wisdom, lest the cross of Christ be emptied of its power. (1 Corinthians 1:17 ESV)

Here is where the rubber meets the road. God always seeks to use the average and lowly to display his power. Israel was small and weak. A poor teenage girl was chosen to carry and be called mother by the Messiah. His birth was announced to lowly shepherds in lieu of kings. Jesus called fishermen not rockstars. If we embrace wholesale the elevation of individual superstars among us are we not preaching a different gospel simply by buying the ticket? God is not looking to advance his kingdom with faces on posters, he is advancing it with those who are on their knees. In the economy of heaven weakness is power and humility is strength.

But he said to me, “My grace is sufficient for you, for my power is made perfect in weakness.” Therefore I will boast all the more gladly of my weaknesses, so that the power of Christ may rest upon me. For the sake of Christ, then, I am content with weaknesses, insults, hardships, persecutions, and calamities. For when I am weak, then I am strong. (2 Corinthians 12:9-10 ESV)

I am painfully aware that the plank may be in my own eye here. My face been displayed on posters and I have led worship for events based on the personalities that would be leading them. I am struggling through these thoughts for myself as much as anyone else, and I cannot simply use the metrics of ticket sales and popularity as the measuring stick for what is good and holy. It was the multitude that danced around the golden calf convinced that they were worshiping Yahweh, when in reality they were at that moment being sentenced to death because of their idolatry. Jesus was irate when he turned over tables in the temple because of the monetization of God’s work of atonement. It is life and death to worship God on his terms and not our own.

I should be careful to point out that I am not speaking about those people whom God has raised up to preach the Gospel with such power and humility that the world takes notice. These do not need booking agents or Groupons to draw a crowd, the faithful preaching of the Gospel is enough. Also, please hear me say that I am not questioning anyone’s love or devotion to the Gospel. Those with their faces printed on glossy posters are not all evil people just looking to make a buck on the back of Jesus. It is possible that they are frustrated with the seeming lack of power that all of this shock and awe type ministry really seems to produce. This is not an attempt to throw a bomb or to accuse anyone of anything, it is a plea for us to look at what we have built and become. It is a begging of the question, is this what we were sent out to be? Is this what Jesus had in mind when he sent us out to do his work? Are we working in humility and service? Are we elevating our weakness or pointing to our strength? Are people leaving our conferences and concerts wanting to lay down their life in service, or thinking how cool it would be if they were on that stage next time? Our hearts are hard wired toward idolatry. We find comfort in praising that which we hope to be. Church leaders must model death to the self and humility in order to see the church reject the need for self exaltation. When we are weak Jesus will shine as strong. Public gatherings are vital to the health of the church. The answer is not to retreat into the shadows, rather the answer is to work as hard as we can to thrust the gospel of Jesus into the light. This cannot happen in concert with our own agenda being pushed into that same light. We must fade into the shadows so that Jesus is the only thing that remains. The content of our speech will not matter if the conduct of our lives does not resonate the same.