Music for Your Easter Season 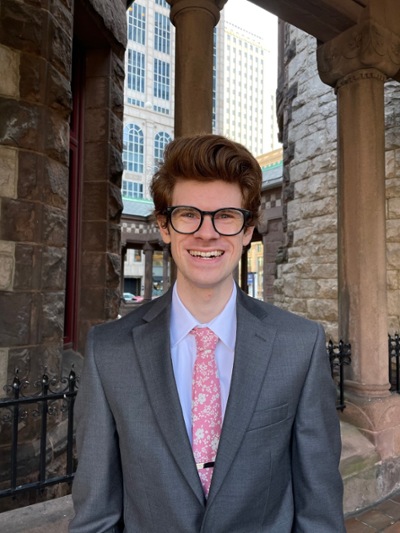 Easter is one of the most important days in the Christian Church.  Aside from Christmas, it is perhaps the grandest occasion Christians partake in.  Easter services draw massive crowds.  Churches add extra services to accommodate all the participants.  Chancels are filled with choirs singing their best repertoire.  Organs roar the final stanza of “Christ the Lord is risen today.”  Congregations have waited through the season of Lent, but “alleluia’s” are heard again.  Crosses are draped in white and flowers adorn the alter.  Preachers bring their best, most powerful, most joyful sermons.  And when the service is over, families and friends will gather around elaborate tables to share special traditions.  Then, on Monday morning, all will be back to normal.  People go back to work (except clergy and musicians, who should take the day off).  The celebration is over.

Before I worked in a liturgical church, I thought Easter was just one day: a special 24 hours set aside for celebrating Christ’s Resurrection.  The liturgical calendar, however, tells a different story.  Instead of Easter lasting one day, Easter is an entire season leading all the way to Pentecost.  Just as Lent was a season of preparation, so is Easter a season of celebration: a time for penitential hearts to rejoice in their resurrected Lord.

The strife is o’er, the battle done,

The victory of life is won;

The song of triumph has begun.

In Exodus 15, Moses and the Israelites sing praise to God for their successful crossing of the Red Sea and the defeat of Pharaoh and his army.  From verses 20 and 21:

Then the prophet Miriam, Aaron’s sister, took a tambourine in her hand; and all the women went out after her with tambourines and with dancing. And Miriam sang to them: “Sing to the Lord, for he has triumphed gloriously; horse and rider he has thrown into the sea.”

This major victory was cause for great celebration, and Miriam knew just how to do it.  Miriam the Prophet became Miriam the Liturgist, and she led the people in a joyful celebration.  The Psalms continuously echo her call to worship.  Psalm 96 commands the whole earth to join Miriam and “Sing to the Lord and bless his name.”

This new song belongs to the whole earth, and to all time.  We, the people of God living today, are extended an invitation to join in the new song of celebration.  I have two albums to recommend to you which can help your hearts join the celebration-song already being sung.

Scott Dettra is one of the foremost organists in the United States.  Formerly at Washington National Cathedral, he now serves at Church of the Incarnation in Dallas, Texas.  Along with the Incarnation Choir, organists, and clergy, he produced an album titled “Choral Evensong for Eastertide.”  This album features all the traditional elements of the Evening Service including hymns, canticles, prayers, readings, Psalms, and even a prelude and postlude.  The service is taken from the 1662 Book of Common Prayer.  This type of Easter service proves that celebration does not negate reverence, nor does reverence negate celebration.  The two are held together simultaneously.  It also features some of the most excellent sacred music one can find.

A particular favorite of mine is the Dallas Canticles.  Composed in 1973 by renown Anglican composer Herbert Howells (1892-1983), these pieces were commissioned by another Episcopal Church in Dallas: Saint Luke’s.  This is the twentieth and final setting of the evening canticles which Howells composed.

Canticles are songs based on scriptural texts, excluding Psalms, that are used for worship.  The Evening Service (or Evensong) from the Book of Common Prayer includes several canticles, the most well-known of which are the Magnificat and the Nunc Dimittis.  These canticles get their names from the first words of their Latin translations.

The Magnificat, or Song of Mary, is found in Luke 1.  When Mary visits her cousin, Elizabeth, they discuss all that’s new in their lives (nothing major, just pregnant with the Messiah), and it leads Mary to proclaim: “My soul doth magnify the Lord!”

The Nunc Dimittis, or Song of Simeon, arrives later in Luke 2.  When the infant Jesus is presented at the temple, there is a man named Simeon, whom Luke describes as “just and devout.”  Simeon had waited many years to see his Messiah, and God promised that he would not die until he had.  Finally, the time arrived and Simeon saw his Salvation.  He said “Lord, now lettest thou thy servant depart in peace…”

These two canticles have formed the basis of the Evening Service, and no small number of composers have contributed their own settings.

One of the Psalms on this album is Psalm 122 “I Was Glad When They Said unto Me.”  This setting was composed by American composer Leo Sowerby (1895-1968).  Sowerby was nicknamed “Dean of American Church Musicians” for his many contributions to sacred music in America.  This joyful and dynamic setting is musically complex and performed with precision.

The album also features music from contemporary American organist and composer Bruce Neswick, as well as organ voluntaries composed by Vincent Persichetti, another twentieth century American composer, in addition to many other great pieces.

Perhaps one of the most profound aspects of this album is the sheer difficulty of the repertoire.  Many church choirs would not have pieces of this magnitude in their repertoire, but the Incarnation choir performs it with ease.  This album is an excellent addition to your own personal engagement with Easter.  Allow this music and liturgy to inform your own private engagement with the Easter season.  I pray it will impact you as much as it has me.

Contained within the season of Easter is Ascension Day.  This Thursday between the sixth and seventh Sundays of Easter commemorates Christ’s ascension to the Father 40 days after the resurrection.  I will recommend a musical work inspired by this day

Olivier Messiaen (1908-1992) was a French organist and composer.  Prior to his teaching at the Paris Conservatory, he was a soldier in the French army during World War II.  One of the biggest names in twentieth century music composition, Messiaen is known for many different works.  Many of his compositions, particularly for organ, are inspired by theological themes, passages of scripture, or liturgical elements.  One of his most well-known organ works is L’Ascension.  Inspired by the Biblical account, Messiaen originally composed three movements of this work for orchestra.  However, he later decided to transcribe it for organ and added another movement (the third).

The suite begins with the slow and grand “Majesty of Christ praying that His Father should glorify Him.”  Second is “Serene Alleluias from a soul longing for Heaven.”  This movement is delicate but very intricate as the organ imitates several different voices in conversation.  Third is the notorious “Outburst of joy from a soul before the glory of Christ which is its own glory.”  It is difficult, sporadic, and triumphant.  Last is the very slow “Prayer from Christ ascending towards His Father.”  In it, Messiaen uses a slow tempo to portray eternity, while the main melodic lines all ascend upwards to mirror Christ’s ascension.

This unique suite reveals so much of who Messiaen was: a virtuosic organist, a progressive composer, and a deeply religious man.  His music is extremely calculated and intentional, and nearly everything carries a deeper meaning.  If this genre of music is new to you, it will certainly take some getting used to.  Some of the harmony can be shocking, but with enough time, you will find it as beautiful as I do.  As you listen, consider the question: what is Messiaen trying to say about God?

Many accomplished organists have recorded this work, but I recommend the recording of Argentinian organist Carlos Cappellaro on Volume 1 of his album Olivier Messiaen: Early Organ Works.

The album from the Incarnation Choir and the suite by Messiaen are biblically and liturgically informed, and they carry profound spiritual meaning.  Meditate on this new song which creation has been singing, and ask God to help you find your own voice in it.  Let your Easter be more than just a day.  Let it be a season of celebration, and use this music to help you.  Miriam has a tambourine for you, and she’s ready for you to join her celebration.  You’ll find God in the midst of it.

So, family of God, the strife is o’er, and the song of triumph has begun.  Jesus, the resurrection and the life (of the party) has extended an invitation to you to join him in a season of celebration and rejoicing.  Take your part in the song of triumph they’re already singing.  Take your seat at the holy table where the holy mysteries are being served.  Come, ye faithful, raise the strain of triumphant gladness!

Nathan S. Peace is a Master of Sacred Music student at Boston University School of Theology. He is an organist, liturgist, and minister with a degree in Music and Worship from Samford University.