Samford Wellness Kitchen: Inviting the Community into the Kitchen 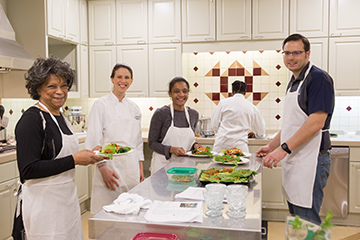 This story originally ran in the Summer 2019 issue of Samford University's Seasons magazine.

“God intended for us to eat real food,” said Pat Terry, a longtime Samford University professor in the School of Public Health’s Department of Nutrition and Dietetics. “We know that eating healthy, physical activity and rest are all important for our overall health, especially in the prevention of disease. Yet I’ve found in my decades as a dietitian that many people who want to focus on whole foods don’t understand the health benefits of the ingredients or know how to cook them.”

In response to this, Terry created the Samford Wellness Kitchen.

The idea was inspired by a Harvard University initiative called Healthy Kitchens, Healthy Lives, a program designed to create teaching kitchens within communities. When Samford’s Department of Nutrition and Dietetics joined the School of Public Health, it relocated to the College of Health Sciences facilities. These buildings include two food production kitchens, which were formerly the test kitchens for Southern Living and Cooking Light magazines.

For Terry, the timing felt right, and the space was perfect. With the support of Samford faculty and several Birmingham-based chefs and registered dietitians, the Samford Wellness Kitchen was born.

Today, roughly two years later, the program has hosted classes for the community, including those in partnership with Birmingham’s Christian Service Mission. This summer, it held its first-ever cooking camp for teens, and it announced a new lineup of two four- week classes for the fall, including:

“Alabama remains one of the unhealthiest states in the nation, and our hope is that the Samford Wellness Kitchen can be the seed that spreads the idea that food is medicine,” Terry said. “These classes include cooking a variety of recipes where participants discover that healthy cooking is easier than they think. They hear the latest scientific evidence about key nutrients and phytonutrients and explore how certain food groups can help prevent disease and promote good health.”

The program also incorporates students, both undergraduate nutrition and dietetic majors and current dietetic interns. “It’s amazing to watch our students and dietetic interns thrive in this environment,” Terry said. “They gain teaching and leadership experience, learning exactly what we hope they will go out and do as dietitians one day.”

In developing the Samford Wellness Kitchen, Terry has interacted with people across the country and around the world who are working to develop similar programs within their communities. “Teaching kitchens have become an international movement. People are creating these kitchens in community centers—even developing mobile kitchens that travel around the city. With the Samford Wellness Kitchen, Samford and the School of Public Health are part of something big,” she said.

To learn about the Samford Wellness Kitchen classes offered this fall, go to samford.edu/go/WellnessKitchen.