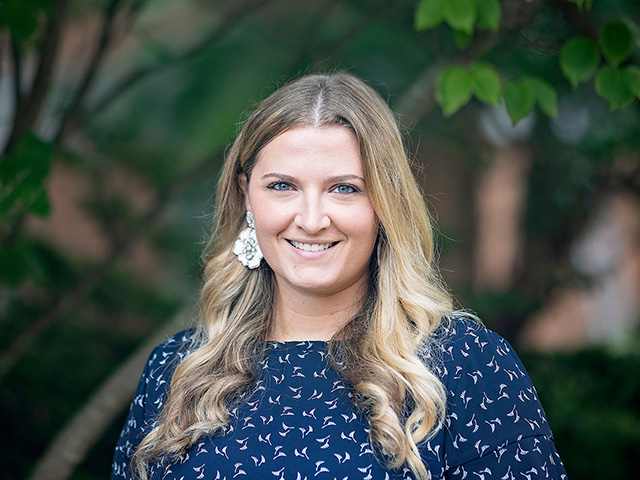 When it comes to finding the right graduate program in Samford University’s School of Public Health, there are myriad choices of varying degrees — literally.

As the School of Public Health’s new recruiter, Kennedy will communicate with prospective students and assist them through the graduate school search process.

“I’m looking forward to getting to know my students individually and working closely with them as they search for additional educational opportunities at Samford University,” Kennedy said. “Over the last several years, I have developed a passion for working with prospective students, and it’s exciting to know that I have a small part in helping them find their purpose.”

Prior to Samford, Kennedy worked for five years as a freshmen admissions advisor at Auburn University, during which time she studied adult education and completed her master’s degree in December 2021. She’d previously earned a bachelor’s degree in communication from Auburn in 2016.

And after nearly 10 years as a Tiger, Kennedy’s excited to become a Bulldog.

“After working at a large, public university for several years, I’m excited to experience a smaller and more personalized side of higher education,” she said.

Kennedy said she was intrigued by the recruiter position and that it seemed the perfect next step, given her previous professional experience and educational background. However, there was something uniquely Samford that closed the deal.

“The people I crossed paths with during my interview process made my decision so easy,” she said. “From the beginning, I knew I wanted to be a part of this supportive, encouraging and family-oriented community.”

Now, she’s inviting students to do the same.