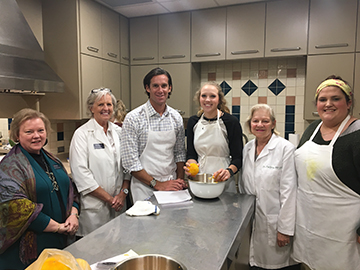 James Briscione ’01 has worked in world-renown kitchens, taught at the nation’s leading culinary institute and even competed—and won—on the culinary competition show, Chopped.

During Samford University’s homecoming weekend, he shared lessons from these experiences and more with nutrition and dietetics students in the School of Public Health.

“It’s certainly true, a lot of the things that happened in my career were about being in the right place at the right time,” Briscione said. “But preparation is still a big part of it. If you are not prepared when the right time comes, the moment can pass you by.”

Briscione started at Samford as a sports medicine major, considering a career as a physician. But having worked in restaurants since high school, he finally realized that his true passion was cooking and food. He declared his major in nutrition and dietetics, and earned a job working for Frank Stitt, a James Beard award-winning chef and restaurateur.

“One day, I put on a suit and knocked on the backdoor of Bottega,” Briscione said. “I told him, I’m a student at Samford. I love cooking, and I want to do it for the rest of my life. Can I start here?”

Briscione earned his Samford degree and continued to work for Stitt for six years, starting at Bottega Café prepping pizza toppings and ending as the chef de cuisine at Highlands Bar and Grill. It was at this time that Briscione moved to New York City where he worked in the kitchens of Daniel Bouloud and served as an instructor at the Institute for Culinary Education.

One day, a group of people from IBM approached Briscione at the institute. They told him that they wanted to use Watson, their question-answering computer system, to help chefs be more creative. Briscione laughed at the idea. “A computer can’t touch, taste or smell. How can it know more about cooking than me, who has been doing this for 15 years,” he said.

He quickly learned that it did. “The computer completely outsmarted me,” he said. “I thought to myself—I’ve got a lot to learn, and that experience set me on on the path I’m on today.”

As a part of the Chef Watson project, Briscione and his team began dissecting ingredients down to the individual compounds that make up each ingredient, like taking a strawberry and analyzing the 400 different chemical compounds that are responsible for its flavor.

“I loved every minute of it—pairing my love for cooking with innovation and science,” he said. “Somehow the chemistry knowledge I gained at Samford hung around in the back of my brain. I’ve come full circle from my days in organic chemistry.”

This science of flavor and the pairing of ingredients is the central idea behind Briscione’s fourth and latest cookbook, The Flavor Matrix: The Art and Science of Pairing Common Ingredients to Create Extraordinary Dishes.

In addition to speaking with students, Samford alumni and friends were invited to a special event with Briscione where he spoke more about his latest projects. Guests were even able to sample recipes from his new cookbook.

“It was an honor to have James back on campus and celebrate all he has accomplished in his career since he graduated from Samford,” said Pat Terry, professor and food labs director in the School of Public Health. “I remember the day when James first knocked my door to discuss changing his major to nutrition and dietetics. The same passion he displayed for food as a student is more evident than ever in his work today. We could not be more proud.”