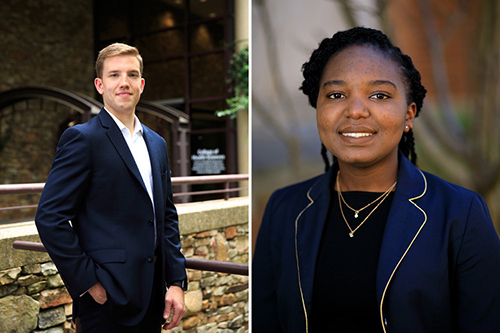 Samford University’s School of Public Health honored 57 graduates at its virtual commencement ceremony, August 15. Of these graduates, 22 earned a Bachelor of Science and 35 received their master’s degree. The ceremony also marked a milestone for the school, honoring its first cohort of students earning the joint Master of Public Health and Doctor of Osteopathic Medicine with the Alabama College of Medicine in Dothan, Alabama.

“At no other time in history has a degree from public health held such meaning and distinction, said Melissa Lumpkin, interim dean of the School of Public Health, “Public health is knowledge that makes a difference and skills that change the world.”

Though virtual, the ceremony upheld the traditional structure of commencement, which includes two graduate speakers. Representing their undergraduate and graduate peers, these speakers included Joyeuse Senga ’20, B.S. in public health, and Alan Troxell ’20, Master of Healthcare Administration. Both speakers shared personal stories from their time at Samford, expressing how the unpredictable nature of life can reveal blessings you didn’t expect.

“From my experience, the plans we so meticulously develop wind up varying drastically from the plans God has for us,” Troxell said. “I am so grateful that no matter how much time and energy I use to try to keep my plans, He always steps in and reminds me that His plan is always best.”

Troxell encouraged his fellow graduates to realize that each of them processes a divine purpose. “Whether you know this to be true or you are still in the midst of making your own plans, my desire is for you to understand that the one who created you loves you and His plans for you are always good.”

In her remarks, Senga admitted that as a student she often debated the major she should pursue. “The only thing I knew for sure was that I wanted to be in a field that would equip me with skills to not only serve vulnerable communities but also to speak up to the inequities that these communities face,” she said.

She found this calling through public health, and at the conclusion of her four years at Samford, she still finds these words to be true—more now than ever before.

“As a class, we’re graduating in a time when there are so many inequities in our communities,” she said. “Maybe a decade from now, we will not remember some of the theories we learned in class, but one thing that gives me hope is that over the past four years I was surrounded by friends and future leaders that I will call from across the globe to discuss how we can achieve a better world.”

Following the speakers’ remarks, the ceremony continued with the reading of each graduates’ name as well as remarks from University President Andrew Westmoreland.

In addition, Westmoreland named Joyner Bousquet ’20, B.S. in healthcare administration, this year’s recipient of the John C. Pittman Award. Named for a Samford alumnus and longtime trustee, the award recognizes a graduating senior who exhibits a serious commitment to being a student and achieving academically, to honoring Christ, and to personal health and involvement in student life.

Finally, a special honor was presented to nutrition and dietetics professor Pat Terry, who retired this spring. She was asked to offer the ceremony’s innovation, honoring her 30 years of service to Samford University.