Poverty Simulation Encourages Participants to Develop Empathy, Being Rooted and Grounded in Love 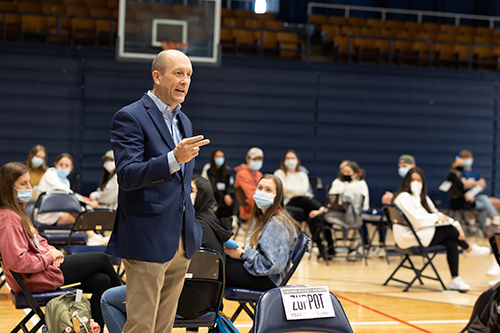 As a part of Samford University’s celebration of the inauguration of President Beck A. Taylor, the School of Public Health hosted a poverty simulation on Oct. 28. The event, titled “Empathy: Rooted and Grounded in Love,” aligned with the scriptural theme for week, Ephesians 3:16-19.

Students and employees from across campus, as well as a few alumni, participated in the meaningful event, designed to provide a glimpse into the obstacles and challenges many who live in poverty face on a daily basis.

The hour-long simulation was divided into four 15-minute segments, each representing a week. Participates were assigned to families and given a background and history for the role they were asked to play. Some families had adults who were employed and others did not. But either way, they had bills that had to be paid.

Younger roles had to attend school, and adult roles had to manage going to work, finding childcare for infants and completing other tasks, like applying for food stamps. Throughout the simulation, participates could visit tables that represented different services that offered help, including social services, a health clinic, the unemployment office and others.

The simulation included more than 150 participants, establishing an interprofessional experience that the School of Public Health hopes will make a lasting impact.

Katherine Tuggle, a junior psychology major, played the role of a grandmother who was financially helping her daughter. She said it was difficult to be organized and pay her bills on time. “We thought we were going to be able to pay for everything, but we got a miscellaneous bill. Now we don’t know if we’ll be able to pay for everything,” she said.

For Tuggle, she said it was eye opening experience, developing a greater sense of empathy for those who live through this day after day.