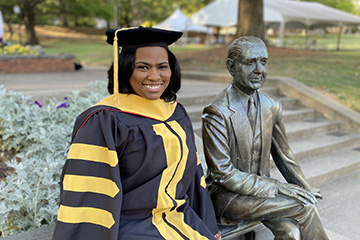 At Samford University’s spring commencement ceremony, Rachel Stokes became the first graduate of the School of Public Health’s Doctor of Public Health, a professional doctoral program designed to prepare graduates for leadership roles in the field of public health, focusing on the practical application of public health principles across a variety of settings.

The degree’s purpose aligned perfectly with the next step in Stokes’ career. “My ultimate goal is to move into public health leadership,” she said. “A Doctor of Public Health provides a particular set of skills that are geared toward leadership and the practice-based realm of public health, which I think is so needed today.”

A native of Anniston, Alabama, Stokes says she grew up seeing her hometown face problems from environmental pollution and health issues. She attended Samford University as an undergraduate student, earning a Bachelor of Science in environment science in 2014. Upon graduation, she thought her next step was medical school. “Both of my parents were doctors, so I grew up in a medically centered family,” Stokes said. “I planned to go to medical school, but I had this nagging feeling: Why fix [the problem] when I could prevent it from the beginning? This stuck with me, and ultimately changed my course.”

Instead of medical school, Stokes pursued her Master of Public Health, focusing on environmental health and toxicology. She then moved to Arizona and began working on a Native American reservation. “I worked for the Indian Health Service, a federal organization that provides health services to American Indians and Alaskan Natives,” she said. “I was stationed in Arizona with an Apache tribe, and I provided environmental health services for about 13,000 tribal members.”

Her role included providing public health technical advice and assistance, as well as addressing needs as a result of COVID-19. Stokes worked full-time while completing her degree online.

“Once COVID-19 hit, I was working overtime, but still in school full time,” Stokes said. “Samford’s faculty and staff really made it possible for me to finish my degree in the timeframe that I wanted to do it.”

Stokes is highly complimentary of her experience at Samford. As one of the first students in the new program, she was occasionally the only student in her classes, but it created an opportunity to work with her professors to tailor her courses to align with her professional goals and desires.

“I really appreciate how Samford took the time to work with me and make it such a personal experience, especially as I completed the program while I was working full-time,” she said.