A Passion for Food 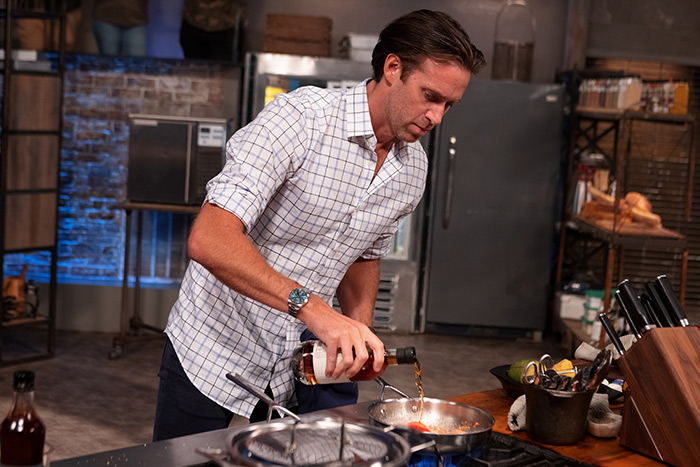 As the family watched Beat Bobby Flay one afternoon, James Briscione ’01 strategized with wife Brooke Parkhurst, daughter Parker, 13, and son August, 6, only a few days before the chef would leave to compete on the Food Network culinary show.

Watching contestants rev up the audience, he remarked he might worm dance. “Don’t even consider it,” Parker said.

Challenged, the Samford University nutrition and dietetics graduate had to worm dance in the heat of the moment halfway through the round as he cooked against Flay.

Briscione, who graduated from Samford with a degree in nutrition and dietetics, initially planned to major in sports medicine, but restaurant work led him to switch majors. He recalled how helpful Professor Patricia Hart Terry was. Terry, who is now retired, served as the chair of the Department of Nutrition and Dietetics in the School of Public Health at the time.

“As I was going through my studies, food really became what I was passionate about," Briscione said.  “She was so wonderful about helping to feed that passion. In my last two years, I was working full-time for (chef) Frank Stitt. (Terry) helped find ways for me to work through my studies, but also be able to immerse myself in the kitchen.”

Briscione cooked not only with the legendary Stitt but, later, Daniel Boulud in New York City. He directed culinary research at the Institute of Culinary Education and he and his wife—a culinary star, too—produced several cookbooks together. In 2019, the couple opened Angelena’s Ristorante Italiano in Pensacola, where he is executive chef and she is the wine director.

Although the two-time Chopped winner had served as a judge on Beat Bobby Flay, he’d not competed on the show. When Flay announced guava as the competitors’ secret ingredient, Briscione figured Latin chef Sue Torres would have the advantage. Nevertheless, he was pleased with his fried goat cheese salad served with guava bourbon jam and pickled guava vinaigrette, up against her guava empanada. Torres ran out of time and didn’t finish, so Briscione moved up in the competition.

Briscione chose tortellini for the next battle against Flay. While Flay stuck with a traditional seafood-stuffed tortellini, Briscione honored his Southern roots with a crawfish version, featuring andouille sausage, crawfish sauce, charred corn and brown butter. He won. And despite his daughter’s warning, he did the worm.

Briscione said his experience at Samford is one of the keys of his success.

“It was the nature of Samford to nurture the students’ passion and to help them find what they loved,” he said. “I’m a great example of that.”

He also credits Samford for lifelong friendships made on campus. “So much about the community and environment fosters those relationships," he said.

Those relationships continue to grow on campus as Briscione gives his time by serving on the Advisory Board for the Department of Nutrition and Dietetics.