On Dec. 12, Moffett & Sanders School of Nursing recognized 48 Bachelor of Science in Nursing graduates during a virtual pinning ceremony. The pinning tradition is a special rite of passage for all nursing students. While the diploma is representative of a graduate's proficiency in the science of nursing, the pin is representative of their mastery of the art of nursing.

Forty-two out of the 48 graduates have already accepted positions serving as nurses across the country including Abigail Hathaway, who will be commissioned as a second lieutenant in the U.S. Air Force.

The Moffett & Sanders School of Nursing pin was designed by the class of 1974, the first class to graduate from the school after it was transferred to Samford University. The pin features two colors, gold to represent the golden rule and blue to represent truth and loyalty. Found in the center of the pin is a stack of books symbolizing the knowledge graduates have gained and will continue to gain throughout their career. The pin also features the image of a lamp in honor of Florence Nightingale.

Faculty presented the December class with the traditional pinning elements before all students were dismissed from campus so that the graduates could be pinned by a person of their choosing while surrounded by family.

During the ceremony, Jacklyn Byrd, a member of the 2020 graduating class, was honored with the Nightingale Award which is presented to the student who most expresses exemplary compassionate care and excellence in clinical nursing practice. Byrd was selected for the honor through a vote by her peers.

In addition to the pinning portion of the ceremony, graduates participated in a virtual rendition of the lighting of the lamp. Florence Nightingale was frequently documented as carrying a lamp as she made her nightly rounds in the hospital wards. The light of her lamp became a beacon of hope to patients. Graduates also recited the nurse pledge acknowledging their commitment to uphold the highest standard of care.

Jane Martin, interim dean and professor, concluded the ceremony with a letter written by Ida Moffett, the school’s namesake, to the 1994 December graduating class. In her letter, Moffett encouraged the graduates to let the pin be a reminder of their daily devotion to the needs of the patient above their own desires and to have the courage to care. 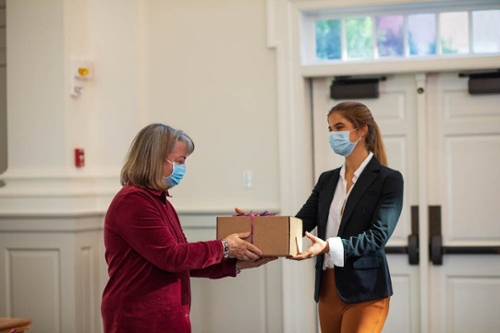 Prior to leaving campus, each graduate was presented with the pinning ceremony elements, a gift from the faculty and a Bible.