A Calling to Public Health and Missions 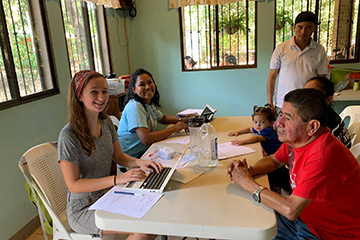 Danielle Hickman, a junior public health major, can easily recall the day the Lord called her to be a missionary. “I was 15 years old, and I had just started to walk with the Lord,” she said. “I was at a worship night with my friends, and we were talking and praying about surrender and what that meant. I remember the Lord literally spoke to my heart, saying I want you to be a missionary.”

Her first thought. “I told him no,” she said. Hickman was in high school; the idea seemed crazy. But as time passed, the thought would not leave her. “I knew this is what the Lord was calling me to do, and I would never be content walking in anything outside of my calling. So, I finally said yes, and I immediately felt the burden lift from my chest,” she said.

Hickman knew that going to college would be an important step in her journey, and she was drawn to Samford University to study in the School of Public Health and participate in the university’s Global Missions Scholars program.

“When I was deciding my major, I knew I wanted to study a specific field that would equip me with unique knowledge and skills that I could use in the mission field,” she said. “I knew public health would do that.”

Hickman experienced the powerful impact of combining public health with missions through her experiences traveling to Nicaragua with the organization, Los Rayos de Esperanza. She has traveled to the country multiple times—already twice this year. Over the summer, she worked with the organization’s medical team, translating for the clinicians and helping with patient intake using a medical records system.

In addition to this work, she oversaw a project with the goal of conducting health surveys and developing relationships with a new community in town. “Through these surveys, I sought to discover the community’s greatest needs but also their greatest strengths,” she said.

“Just think, all of those chemicals had seeped into that plastic, and now they were storing their drinking water in it. Families had to go into town to buy water, and these buckets were the only thing they had to carry it in. Once at home, they would just leave the water in the bucket with a piece of plywood on top to keep the mosquitos out,” she said.

The solution was to work with the local government to complete the installation of pipes that would provide running water in each family’s home, but Hickman’s work did not end there.

“We realized that there was a great spiritual need because none of the families went to church, except the community leader,” she said. “We worked to equip the community leader, who was a Christian, with resources and devotionals, so she can start a Bible study with families in her community. It was amazing to be able to empower her in that way.”

The program, led by Samford’s Office of Spiritual Life, consists of weekly cadres and monthly dinners that work to expand students’ faith and expose them to life on the mission field.

“I realize now that when I came to Samford I didn’t know much about missions; I just knew that it was what the Lord was calling me to do,” Hickman said. “I have learned so much about my calling through this program and what missions truly means.”

The Global Missions Scholars program has proven to be the perfect pairing with her public health major, showing her the impact relationships and community development can have in caring for the whole person. “As much as I feel a calling to missions, I also feel a strong calling to public health,” she said.