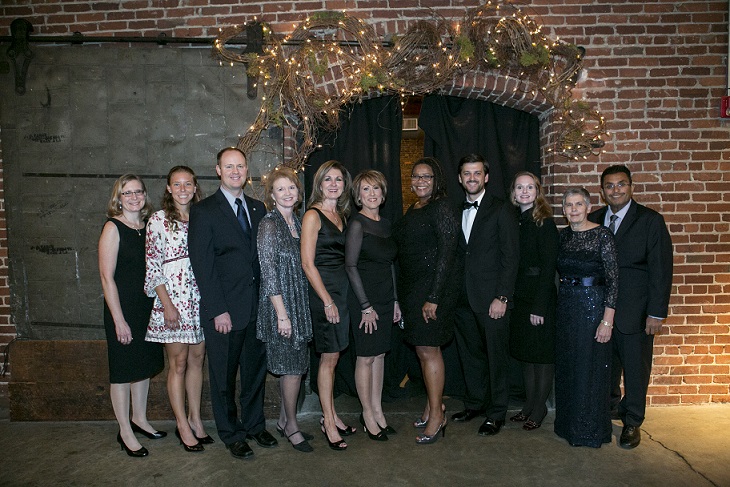 Samford University's Ida V. Moffett School of Nursing honored 11 alumni at its annual Courage to Care gala Friday, Oct. 10. The honorees, including Living Legacy award recipient Sondra Tatum McGinnis, were cited for their adherence to the maxims of the school's namesake, the late Ida V. Moffett.

"Ida V. Moffett was characterized by her commitment to nursing education and her patient-centered approach to nursing practice," said nursing school dean Eleanor V. Howell in reference to the late nursing educator's oft-quoted belief that "It takes courage to care, to open the heart and act with sympathy and compassion."

The 2014 honorees highlight the many opportunities nurses have to make an impact on patients, families and the world around them. Each nurse’s path is different, but the honorees are united by their commitment to providing the highest quality of patient care and leadership within the profession. They all hold degrees from the School of Nursing or its forerunner, Birmingham Baptist Hospital.

In 2012, in celebration of its 90th anniversary, the school established the Living Legacy Award to highlight a graduate whose local touch has a global reach through leadership and service to others.

McGinnis, who serves as director and associate chief nursing officer for Physicians Services at Erlanger Health System in Chattanooga, Tenn., is cited as an accomplished clinician, administrator and philanthropist.

In her current role, McGinnis is responsible for nursing oversight for all physician practices and is responsible for operations and financial stability of all primary care practices. McGinnis has a strong reputation for commitment to addressing and solving issues in her community.  In 1998, she established the Chattanooga Therapeutic Riding Center, a 501c3 organization providing therapeutic horseback riding for mentally and physically challenged children. She served as president and director of the organization until 1994.

Courage to Care honorees are:

Samford nursing school advisory board member and retired professor Barbara Money was chairperson of the awards gala, held at B & A Warehouse in Birmingham. Members of the advisory board served as hosts for the event.

The School of Nursing presents Courage to Care awards and a Living Legacy award annually. To learn more about the awards and to download a nomination packet, please visit samford.edu/nursing/alumni-awards.
Samford is a leading Christian university offering undergraduate programs grounded in the liberal arts with an array of nationally recognized graduate and professional schools. Founded in 1841, Samford is the 87th-oldest institution of higher learning in the United States. The Wall Street Journal ranks Samford 1st nationally for student engagement and U.S. News & World Report ranks Samford 37th in the nation for best undergraduate teaching and 97th nationally for best value. Samford enrolls 5,758 students from 48 states and 22 countries in its 10 academic schools: arts, arts and sciences, business, divinity, education, health professions, law, nursing, pharmacy and public health. Samford fields 17 athletic teams that compete in the tradition-rich Southern Conference, and ranks 3rd nationally for its Graduation Success Rate among all NCAA Division I schools.