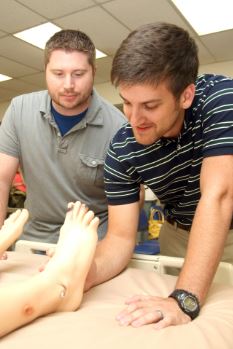 Samford University's Ida V. Moffett School of Nursing has announced that for the third time it has been awarded a grant from the prestigious Robert Wood Johnson Foundation (RWJF) New Careers in Nursing Scholarship Program. It is one of 52 schools of nursing that will comprise the final cohort of the program. For the 2014-2015 academic year, Ida V. Moffett School of Nursing will receive $50,000 to support traditionally underrepresented students who are making a career switch to nursing through an accelerated second baccalaureate nursing degree program. NCIN is a program of RWJF and the American Association of Colleges of Nursing (AACN).

"New Careers in Nursing has made amazing strides in helping schools of nursing recruit and retain diverse students in these competitive and rigorous accelerated degree programs," said David Krol, MD, MPH, FAAP, RWJF senior program officer. "Through supporting these institutions, NCIN is working to increase the diversity of our nursing workforce, while also assisting schools of nursing in making their institutions more inclusive. The leadership, mentoring and other support these institutions provide are helping to prepare a diverse nursing workforce able to meet the challenges associated with building a culture of health in our nation."

Each NCIN Scholar has already earned a bachelor's degree in another field, and is making a transition to nursing through an accelerated nursing degree program, which prepares students to assume the role of registered nurse in as little as 12-18 months.

"As a third time recipient, we have seen the impact of the Robert Wood Johnson Foundation's NCIN funds on students, realizing that without these scholarships many of them would not have the opportunity to pursue their calling to the nursing profession," said Dr. Nena F. Sanders, Ida V. Moffett School of Nursing dean. "The recipients of these funds excel in the classroom and seamlessly enter the workforce prepared to make a difference in the lives of patients and their families."

In addition to a $10,000 scholarship, NCIN scholars receive other support to help them meet the demands of an accelerated degree program. All NCIN grantee schools maintain a leadership program and a mentoring program for their scholars, as well as a pre-entry immersion program to assist scholars in learning essential study, test-taking, and other skills needed to succeed in their program of study.

"Nursing and nursing education are at a critical juncture right now, and NCIN's exemplary approach to supporting nursing schools is helping to strengthen both," said AACN President Eileen Breslin, PhD, RN, FAAN. "NCIN's creative, innovative and responsive approach to providing grantees with tools to ensure academic success will result in lasting changes at nursing schools nationwide. The NCIN program has truly raised the bar for recruitment, retention, mentoring and leadership development for nursing students from groups underrepresented in nursing."

According to Sanders, the 2010 Institute of Medicine (IOM) report, The Future of Nursing: Leading Change, Advancing Health, recommends increasing the proportion of nurses with a baccalaureate degree or higher, and increasing the diversity of students to create a nursing workforce prepared to meet the healthcare demands of diverse populations across the lifespan. NCIN is helping to advance those recommendations by enabling schools to expand student capacity and by encouraging more diversity.

By bringing more nurses into the profession at the baccalaureate and master's degree levels, the NCIN program also helps to address the nation's nurse faculty shortage, Sanders added. This trend is reflected in the NCIN scholars, as 91 percent of the students receiving funding in the first three years of the program indicated a desire to advance their education to the master's and doctoral levels.