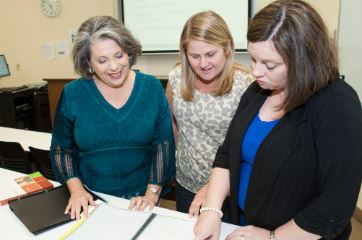 Samford University's Ida V. Moffett School of Nursing has received the second largest award nationally of the 86 Nurse Faculty Loan Program (NFLP) grants for 2015-16. This is the 13th year for Samford to receive the grant from the U.S. Department of Health and Human Services, Health Resources and Services Administration (HRSA).

Samford's grant of $1,741,140 is second only to Case Western Reserve University in Ohio. It is one of only five grants nationally that exceed $1 million.

NFLP grants are designed to help ease a national shortage of nursing educators, according to Jane Martin, associate nursing dean and the HRSA grant administrator at Samford. Students who receive loans for master's or doctoral degree programs can have up to 85 percent of the loan forgiven in exchange for service as full-time nursing faculty members at an accredited school of nursing. Students continue to receive funds for the duration of their degree program as long as they maintain good academic standing.

“Across the country, the faculty shortage is impeding our ability to address the increased demand for nursing professionals,” said Eleanor V. Howell, dean of Samford’s nursing school.  “As we prepare for the projected need of more than 900,000 RN positions in the U.S. by 2020 and a projected wave of nursing faculty retirements in the next five years, this Nurse Faculty Loan award allows the Ida V. Moffett School of Nursing to address this need in Alabama and across the nation,” added Howell.

According to a report by the American Association of Colleges of Nursing (AACN), U.S. nursing schools turned away 68,938 qualified applicants from baccalaureate and graduate nursing programs in 2014. Almost two-thirds of the nursing schools responding to the survey pointed to faculty shortages as a reason for not accepting all qualified applicants into baccalaureate programs.

The NFLP was approved by Congress in 2002, and Samford was one of the first 55 nursing schools from across the U.S. to receive funds. Samford's NFLP grants now total more than $7.1 million and more than 300 students have benefitted from NFLP awards at Samford and are serving as nurse educators across the country.

“Thanks to our outstanding faculty, innovative curriculum and successful alumni, Ida V. Moffett School of Nursing has established itself as a leader in the preparation of nurse educators,” said Martin.

“Preparing nurses to assume faculty positions remains a top priority in the school and we are proud that our graduates leave us prepared to seamlessly transition into faculty positions in areas of need. These graduates are accepting not only teaching positions, but also academic leadership positions throughout the country,” she added.

To apply for admission to Samford graduate programs in nursing, go to http://www.samford.edu/nursing/graduate-nursing/.

About Ida V. Moffett School of Nursing at Samford University  –

Established in 1922, Ida V. Moffett School of Nursing is an international leader in nursing education, practice and service.  The school's history is one of tradition founded on the principles and philosophies of legendary nurse Ida Vines Moffett. Ida V. Moffett School of Nursing offers a variety of degree options—traditional Bachelor of Science in Nursing (BSN); Second Degree BSN; Accelerated Second Degree BSN; Master of Science in Nursing (MSN) with programs in Family Nurse Practitioner, Nurse Educator or Nurse Anesthesia; RN to MSN; and Doctor of Nursing Practice. Graduates consistently pass their certification exams at rates far surpassing national averages. In 2015, MSN programs were ranked #48 in the nation for online nursing education by U.S. News & World Report. Over the past 90 years, more than 5,000 nurses have graduated from the school and are practicing throughout the United States and around the world. Learn more at www.samford.edu/nursing