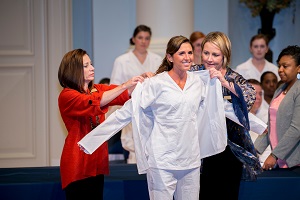 Ida V. Moffett School of Nursing hosted its White Coat Ceremony on Monday, Oct. 3 in Samford’s Brock Recital Hall. Seventy-four Bachelor of Science in Nursing students who began clinical courses this semester were honored during the event. Students represented the traditional B.S.N. program as well as the accelerated second-degree B.S.N. and the veterans’ B.S.N. programs.

According to nursing school dean and vice provost of the College of Health Sanders, Nena F. Sanders, the White Coat Ceremony’s purpose of instilling a commitment to providing compassionate care among future health professionals aligns perfectly with the core values of the School of Nursing and the school’s namesake, the late Ida Vines Moffett.

In her address to the students, Sanders emphasized that the white coat symbolizes an answer to a calling. “Nursing is more than a job—it is a calling to put others’ needs before our own,” she said. Sanders shared stories of the school's namesake and emphasized that the ceremony is a “hallmark” in the life of a nursing student. She urged students to remember that moment and the commitment they made as they begin carrying out the Moffett legacy of compassionate patient care.

The ceremony included the presentation of a white coat and commemorative pin to each student. The pin serves as a visual reminder of the students’ commitment to providing compassionate, patient-centered care, and of the nursing poem recited during the ceremony. Students were presented their coats by faculty and staff members, Megan Mileski, Jan Paine, Angela Wilson and Stephanie Wynn.  Assistant professor, Heidi Callighan, led students in the nurse’s poem.

White Coat Ceremonies have long been an important rite of passage at medical schools. In 2014, Samford was selected as one of only 100 nursing schools in 43 states selected by the Arnold P. Gold Foundation (APGF) and the American Association of Colleges of Nursing (AACN) to pilot White Coat Ceremonies for nursing students. This program marked the first coordinated effort to offer White Coat events at schools of nursing. The White Coat Ceremony has become a tradition in the Ida V. Moffett School of Nursing with ceremonies occurring each fall and spring.