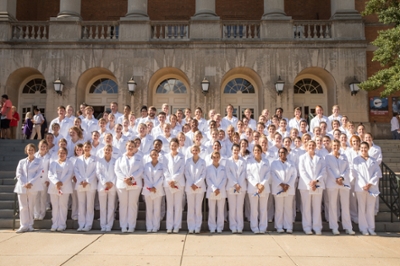 Samford University’s Ida Moffett School of Nursing held its first White Coat Ceremony of the academic year on Monday, September 17 in Samford’s Wright Center. One hundred Bachelor of Science in Nursing students who began clinical courses this semester were honored during the event. Students represented the traditional B.S.N. program as well as the accelerated second-degree B.S.N. and the veterans’ B.S.N. programs.

Each participant received a white and commemorative pin which serves as a visual reminder of the student’s commitment to providing compassionate, patient-focused care. Faculty and staff members, Jennifer Childress, Lauren Jones, Rebecca Warr, Angela Wilson, Jan Paine, and Trisha Stovall, presented each student with their coats.

The White Coat Ceremony’s purpose is to instill a commitment to providing compassionate care among future health professionals which aligns with the core values of the School of Nursing and the school’s namesake, the late Ida Vines Moffett.

Nursing dean and vice provost of the College of Health Sciences, Dr. Nena Sanders, affirmed these values and the calling that each student is answering in her address to the students. “I believe that the cornerstone of Ida Moffett School of Nursing is compassionate caring, built on the foundation of clinical excellence,” she said. “It is what makes our graduates “Moffett Nurses” - they are known for their knowledge and clinical excellence, and their hallmark is the way they practice the science of nursing with care and compassion.”

Samford was one of the original 100 nursing schools selected by the Arnold P. Gold Foundation (APGF) and the American Association of Colleges of Nursing to pilot White Coat Ceremonies for nursing students. Often viewed as a rite of passage at medical schools, the White Coat Ceremony has become a tradition with ceremonies occurring each fall and spring.