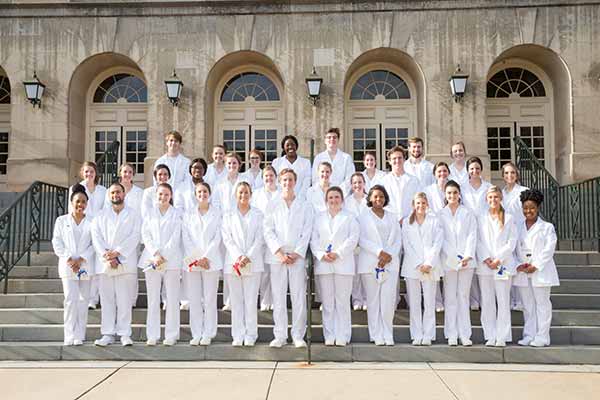 According to nursing dean and vice provost of the College of Health Sciences, Nena F. Sanders, the White Coat Ceremony’s purpose of instilling a commitment to providing compassionate care among future health professionals aligns perfectly with the core values of the School of Nursing and the school’s namesake, the late Ida Vines Moffett.

In her address to the students, Sanders emphasized that the white coat symbolizes an answer to a calling. “Nursing is more than a job—it is a calling to put others’ needs before your own,” she said. Sanders referred to the ceremony as a “hallmark” in their life of a nursing student and she urged the students to remember this moment as they begin carrying out the Moffett legacy of compassionate patient care.

The ceremony included the presentation of a white coat and commemorative pin to each student. The pin serves as a visual reminder of the students’ commitment to providing compassionate, patient-centered care, and of the nursing poem recited during the ceremony. Students were presented their coats by faculty and staff members, Geri Beers, Cynthia Ritter, Jennifer Steele and Angela Wilson.  Assistant professor, Moniaree Jones, led students in the nurse’s poem.

White Coat Ceremonies have long been an important rite of passage at medical schools. In 2014, Samford was selected as one of only 100 nursing schools in 43 states selected by the Arnold P. Gold Foundation (APGF) and the American Association of Colleges of Nursing (AACN) to pilot White Coat Ceremonies for nursing students. This program marked the first coordinated effort to offer White Coat events at schools of nursing. The White Coat Ceremony has become a tradition in the Ida Moffett School of Nursing with ceremonies occurring each fall and spring.

Samford University’s Ida Moffett School of Nursing has a rich history as a leader in nursing education, practice and service. The school is founded on the principles and philosophies of legendary nurse Ida Vines Moffett. Graduates from the school have the wisdom, skills and courage to go out into the world and make people’s lives better. The school offers a variety of degree options at the baccalaureate and doctoral levels and graduates consistently pass their certification exams at rates far surpassing national averages. Over the past 95 years, more than 4,000 nurses have graduated from the school and are practicing throughout the United States and around the world. Visit samford.edu/nursing to learn more.

The Arnold P. Gold Foundation (APGF): The Arnold P. Gold Foundation’s overarching goal is to create the Gold Standard in healthcare – compassionate, collaborative and scientifically excellent care – to support clinicians throughout their careers, so the humanistic passion that motivates them at the beginning of their education is sustained throughout their  practice. We strive to ensure that care and respect always govern the relationship between practitioner and patient.