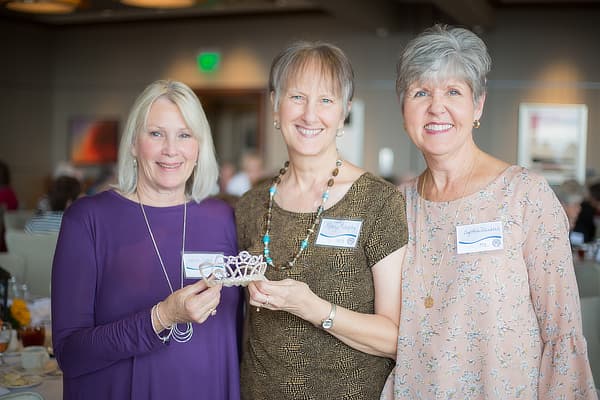 On a rainy day in November, during Homecoming week, a group of over 125 from the Birmingham Baptist Hospital (BBH) School of Nursing gathered in the Iris State Room at The Club to celebrate their distinguished history, reconnect with friends and share memories of their time at the school.

Clutching yearbooks, photograph albums and more, the society embraced each other with hugs and exclamations of joy and surprise at seeing each other and reminiscing on their time together. Class members from 1922-1974 attended this annual luncheon, with special recognition for Helen Lucas, class of 1951, the graduate from the earliest class who was able to attend.

The Cap and Cape Society was formed shortly after the BBH School of Nursing joined Samford University in 1975. Since then, Samford’s Ida Moffett School of Nursing has celebrated the distinguished history of BBH by inviting graduates to an annual luncheon. Other activities for the society include class reunions, Homecoming and the Courage to Care gala.

This year, Mary Love Murphy from the class of 1973 was kind enough to bring an artifact she kept from her time at the school—a small, delicate and beautiful pearl tiara, handed to recipients of the title Miss Ida V. Moffett in years past. This title and honor were celebrated during the May festival through 1973.

“I received the tiara when I was ‘crowned’ Miss Ida V. Moffett in 1973. There were also two runners-up, Cynthia Thacker (Dinkins) and Jan Parrott,” shares Murphy. “The pageant was held in the auditorium of Ida Moffett School of Nursing, located at Baptist Medical Center, Montclair.”

“The winners were chosen by popular vote of the entire student body, and the qualifications were persons who best exemplified the ideals of Ida Moffett School of Nursing. Photos of the May festival and past winners of Miss Ida V. Moffett can be found in past editions of the BBH yearbook, Blackband.

“It was very surprising to me to win this honor, knowing that anyone could have been chosen. I had never won any award like this before. I fully expected there to be future May festivals and that I would have the privilege of crowning the next one in 1974. But since the festival did not continue, I kept the tiara in a box in my various attics for these almost 45 years until 2018,” Murphy continues. “In 2017, at the alumni luncheon, I heard the plea for ‘memorabilia’ from our nursing school days to be donated to the archives of the nursing school, and I immediately thought of giving back the tiara. It is a piece of the school’s history, the school which prepared me and many others for a lifetime of nursing service to hurting people.”

Throughout Ida Moffett School of Nursing’s history, those ideals and core values have held fast. Despite the constant changes in the nursing profession, the school remains committed to training nurses through academic excellence, selfless service, ever-present caring and compassion.

Ida Moffett School of Nursing is privileged to have amazing stories and artifacts to celebrate its history and are grateful to those that make it richer every day.