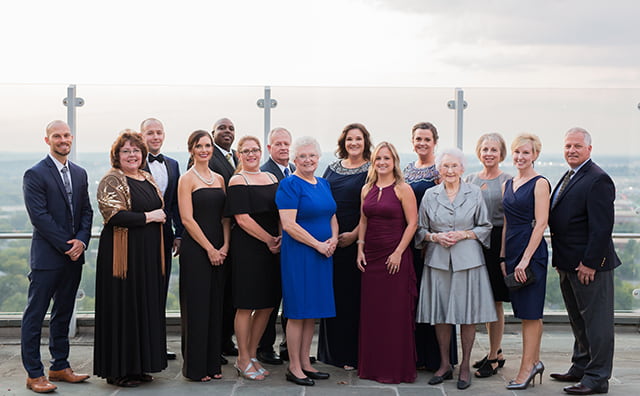 Samford University’s Ida Moffett School of Nursing honored 60 distinguished alumni at its annual Courage to Care Gala Sept. 27. The honorees were selected based on their commitment and service to the nursing profession as well as their fulfillment of the maxims established by Ida Vines Moffett, the school’s namesake.

“For nearly 100 years, our alumni have changed lives, compassionately serving and caring for those around them while simultaneously pursuing excellence in practice,” said Nena F. Sanders, nursing school dean and vice provost of Samford’s College of Health Sciences. “It is our honor to celebrate the achievements of our school’s most outstanding alumni.”

Fifteen alumni were presented with the Courage to Care Award and the class of 1959 was presented with the Living Legacy Award, the school’s highest alumni honor. The 2019 honorees have served the profession in virtually all areas of nursing. From serving faithfully at the bedside to leading in nursing education or contributing research, grant writing and nursing literature, together, the 2019 honorees have touched the lives of thousands.

The gala honors alumni whose transformational work has made a significant impact on others. The event also provides financial support for the school by enhancing scholarship opportunities for nursing students. During the event, nurse anesthesia student and scholarship recipient Jennifer Lambert shared her Samford story with attendees.

“Your generous donations to support college students have a much bigger impact than just on the individual student,” said Lambert. “Once I become a CRNA, you will be a part of saving a life or improving someone’s quality of life. When you contribute to health care programs, the impact of your generosity has no limits.”

The 2019 honorees were celebrated and presented with a certificate of distinction and an award. Former Living Legacy recipient and Ida Moffett School of Nursing Advisory Board chair Chris Moore aided Sanders in presenting the awards. Rachel Steil, a family nurse practitioner student, provided the invocation.

Ida Moffett School of Nursing hosts the Courage to Care Gala annually. To learn more about the awards or to download the nomination packet, please visit samford.edu/nursing/alumni-awards.