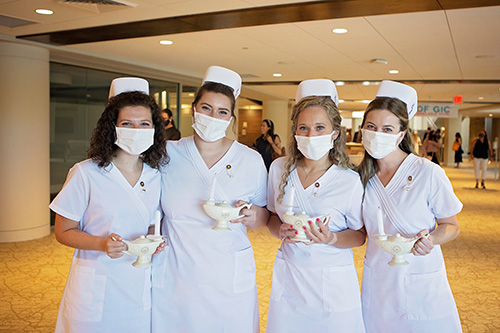 On May 6, Samford University's Moffett & Sanders School of Nursing recognized 72 Bachelor of Science in Nursing graduates in its Class of 2021 during the school's annual pinning ceremony. The pinning tradition is a special rite of passage for graduating nursing students. While the diploma represents a graduate's proficiency in the science of nursing, the pin is representative of their mastery of the art of nursing.

"The pinning tradition ceremony dates back to the 1860s when Florence Nightingale was awarded the Red Cross of St. George, in recognition of her tireless service to the sick and injured during the Crimean War," said Jane Martin, interim dean of the nursing school. "To share the honor, she, in turn, presented a medal of excellence to her brightest graduates."

Today, the practice is standard at nursing schools across the United States. The pinning ceremony is set apart from other commencement activities as it signals an answer to the calling of nursing.

"The pinning service is different than graduation," Martin said. "Graduation, or commencement, focuses on academic accomplishments, and pinning is a recognition that you are entering into the service to your fellow man as a nurse."

Designed by the Class of 1974, the Moffett & Sanders School of Nursing pin features two colors, gold in the representation of the golden rule and blue to represent truth and loyalty. Found in the center of the pin is a stack of books representing the knowledge students have gained and will continue to gain throughout their career. The pin also features the image of a lamp in honor of Florence Nightingale, the founder of modern nursing. She was frequently documented as carrying a lamp as she made her nightly rounds in the hospital wards.

The ceremony involves recognizing students who went above and beyond in their commitment to the nursing calling. Julia Conley '21 was this year's recipient of the Nightingale Award, which is given to a student who expresses compassionate care and excellence in clinical nursing practice.

"The award is especially significant because the recipient is selected by a vote of their peers and is characterized as someone who is a nurse's nurse," said Emma Bethea '21, class vice president. "The recipient can be described as a nurse who demonstrates outstanding nursing skills utilizes exceptional critical thinking and professional judgment advocates for patients and their families and expresses care and compassion in their nursing practice."

Amanda Barron, assistant professor of nursing, gave the keynote address and spoke on the journey of a Samford nursing student. She encouraged the students to continue to learn and to build relationships.

"Build relationships with your patients. There are some really amazing people out there. One of the best parts of nursing is getting to know such a variety of patients," Barron said. "Learn their names, ask them what they want to be called, it shows them respect. They may not remember your name, but as Maya Angelou said, people will always remember how you made them feel."

Following the pinning of the new nurses, the lighting of the lamp ritual took place. Florence Nightingale was frequently documented as carrying a lamp as she made her nightly rounds in the hospital wards. The light of her lamp became a beacon of hope to patients. The lamp also symbolizes the search for scientific knowledge and commitment to lifelong learning. The Moffett & Sanders School of Nursing lamp features the Samford University crest.