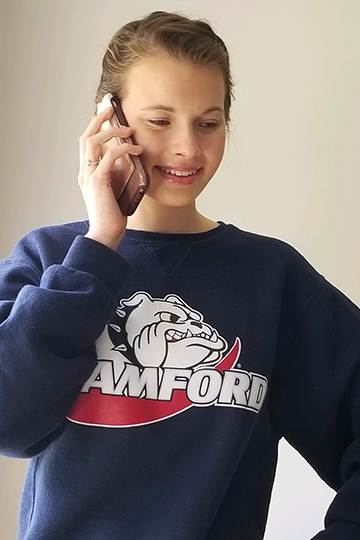 Taylor Tucker, a senior public health major in Samford University’s School of Public Health, was planning to volunteer this semester with Sowing Seeds of Hope, a nonprofit located in Perry County, Alabama. She was hoping to attend the April meeting of a diabetes support group Rachel Casiday, an associate professor in the school, leads through the organization.

While these monthly gatherings had to be canceled, Casiday found a way for participants—as well as Samford students—to stay involved.

In lieu of their physical meeting, Casiday asked students, including Tucker, Joy Senga, a senior public health major and Bailey Spivey, a Doctor of Physical Therapy student, to call participants and check on how they are doing. “It’s simple idea that I know makes a meaningful difference,” Casiday said. “Asking the question, ‘how are you doing,’ can easily go beyond the surface, providing the opportunity to address an individual’s physical and mental well-being.”

Tucker, Senga and Spivey began making these phone calls at the beginning of the month. “I’ve been able to make three calls where the person answered… and each conversation is different,” Tucker said. “One woman wanted to talk about her diabetes; another talked about how she is maintaining social distancing in her home. And the third person simply wanted to talk to me about her garden. I loved it.”

Casiday provided the students with a simple script—asking questions like, are you eating well and getting exercise? Do you have your medications, and is someone able to bring you food? But for Tucker, she knew the purpose of these phone calls had a deeper meaning.

“It’s a very simple act to pick up the phone and talk to someone,” Tucker said. “With these calls, we’re reaching out to people who live in small, rural towns. They don’t see many people who are just walking by, and they may not have the resources to reach out to family members or make phone calls often.”

“Like with my conversation about the garden—talking about flowers—these conversations are for our mental health too,” she said.

This diabetes support group is part of an ongoing partnership between Samford University and the communities of Perry County, which involves students, faculty and staff from the School of Public Health, McWhorter School of Pharmacy, School of the Arts, and the Mann Center for Ethics and Leadership.