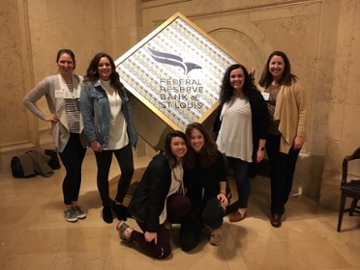 A trip to the 2018 Women in Economics Symposium in St. Louis, Missouri, encouraged female students in Samford’s Brock School of Business to think about starting a club for women in economics and finance. Held at the Federal Reserve Bank of St. Louis in February, the symposium was geared towards diversity in the economics field and how women can have a larger presence in the discipline.

The group included business professors Sara McCarty and Anna-Leigh Stone and students Shelby Collins, Hannah Florence, Olivia Jarvis, Abbey Robertson and Kayleigh Hudson. They began their visit with a preliminary presentation from Yvette Fortova of the Federal Reserve Economic Data (FRED) division. Fortova demonstrated the many capabilities of the FRED data interface, introduced “Fredcast,” an economic forecasting league, and presented one of the Federal Reserve’s newest acquisitions, a dataset titled “Three Centuries of Macroeconomic Data in the United Kingdom,” which dates back to 1660.

“Fredcast is basically fantasy football for the economy,” said McCarty.

Claudia Sahm, a member of the Federal Reserve’s Board of Governors, provided keynote remarks, highlighting the under-representation of women in economics, noting it was even lower than in STEM (science, technology, engineering and math) disciplines, and discussed some of the challenges faced by women in the profession.

The group attended breakout sessions highlighting such topics as “Navigating the Job Market,” “Why Economics?,” “Strategies for Engaging Women in the Classroom” and “Diversity Issues in the Workplace.”

Speaker Mary Daly, executive vice president and director of research at the Federal Reserve Bank of San Francisco, stressed “the importance of bringing all of yourself to economics and to your career.” Daly added, “The simplest solution to getting more women involved in the field is by encouraging young women to pursue economics in college.”

Samford student Collins, a junior finance and economics major, said her greatest takeaway was that in order to be successful in this field, “you have to be confident in yourself.” Collins wants to pursue a career in policy or economic development.

Concluding the conference was a panel conversation by Sahm, Daly and Ellen Zentner, managing director and chief U.S. economist at Morgan Stanley.

“It was so empowering to be surrounded by women who have paved the way for younger generations to find their place in a male dominated field,” Collins said. “It can be overwhelming to be the only female in a class, but meeting and talking to these women renewed my passion for economics.”

“I am thankful for the opportunity to take some of our promising female economics and finance students to the symposium,” said McCarty. “They immediately asked if we could start a club for women in economics and finance at Samford. They would call it ‘Finance and Economics Women’ or simply, F.E.W.”

“The opportunities in economics and finance for our female students have never been stronger,” said Dean Howard Finch. “I am grateful to Professors McCarty and Stone for their mentorship of these outstanding Brock students.”

Before traveling home, the group was able to trek to the top of the Gateway Arch, visit the Old St. Louis County Courthouse where the Dred Scott case was held, tour the St. Louis Cathedral, and explore the Inside the Economy Museum at the Federal Reserve Bank of St. Louis.