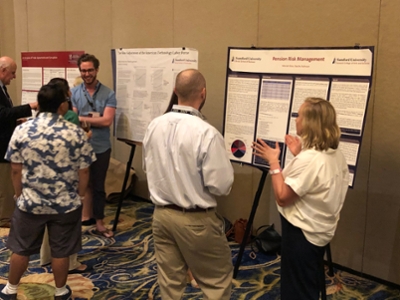 In early April, Samford’s Brock School of Business faculty and students had the opportunity to present their research at the Association of Private Enterprise Education’s (APEE) 44thAnnual meeting in Nassau, Bahamas.

APEE is an association of teachers and scholars from colleges and universities, public policy institutes, and industry with a common interest in studying and supporting the system of private enterprise. The annual conference allows members to share their scholarly findings and offers a number of awards to recognize individuals who have contributed to the cause of private enterprise.

Joy Buchanan, assistant professor of quantitative analysis and economics, co-led a panel with seniors Moriah Stice and Rachel Johnson. Buchanan, Stice and Johnson presented to the meeting delegation about “Advancing Women in Liberty.” Stice and Johnson are two of the founding members of the new Samford student organization, Finance and Economics Women (F.E.W.).

“We shared about F.E.W. and the impact it has had on the Samford students as well as the future areas in which we are looking to grow,” Stice said. “The panel discussion provided the opportunity to hear from other women who are promoting and advocating for women in economics while also representing Samford and F.E.W.”

Stice and Johnson also presented their senior research on pension risk management in the undergraduate poster session. The students used data collected from the 2017 fiscal year Form 5500 from 100 publicly traded companies that have pension plans. From there, they ran regressions to see what factors contributed to a company being more likely to take a risk management action, that is offering a bulk lump sum or an annuity purchase.

“Our results found that companies in the consumer defensive sector are the most likely to take a risk management action, but all companies are taking these actions regardless of varying independent factors as they transition to a 401(k) instead of a pension plan for their retirement,” Stice stated.

Buchanan presented her paper “My Reference Point, Not Yours.” And, she and senior Noah Leatham presented on a paper they are coauthoring about skills shortages within the technology labor force titled “The Slow Adjustment of the American Technology Labor Force.”

“Policymakers and CEOs often lament over the purported ‘skills gap’ within S.T.E.M. fields,” Leatham noted. “My research with Dr. Buchanan seeks to investigate whether a skills shortage actually exists and, if so, what’s causing it.”

Their research also identifies several areas where shortages are likely to persist and the structural barriers in place that exasperate the issue. Additionally, they touch on immigration, early education programs for S.T.E.M. fields, growing wage inequality, and the rise and dominance of ‘superstar’ workers.

Art Carden, associate professor of economics, organized and chaired a panel on the 50th anniversary of the publication of economist James M. Buchanan’s book Cost and Choice. He alsoserved as a conference presenter focusing on his paper on ethical maturity and economic growth which he coauthored with Jennings Marshall, professor of economics, and a George Mason University graduate student.

“The conference was a completely worthwhile experience,” Leatham said. “Getting to present a paper at an academic conference to a room full of very smart people sounded absolutely terrifying, but the experience was not only fun, it prepared me for future conferences, reinforced my presentations skills, and got me thinking about the research in new ways.”

“I was really proud of the students for giving presentations at the conference, Buchanan stated. “This experience builds their confidence as they prepare to go out into the professional world.”