Accounting Alumnus Reflects on Relationships Made at Samford; Looks Toward Harvard and Dartmouth 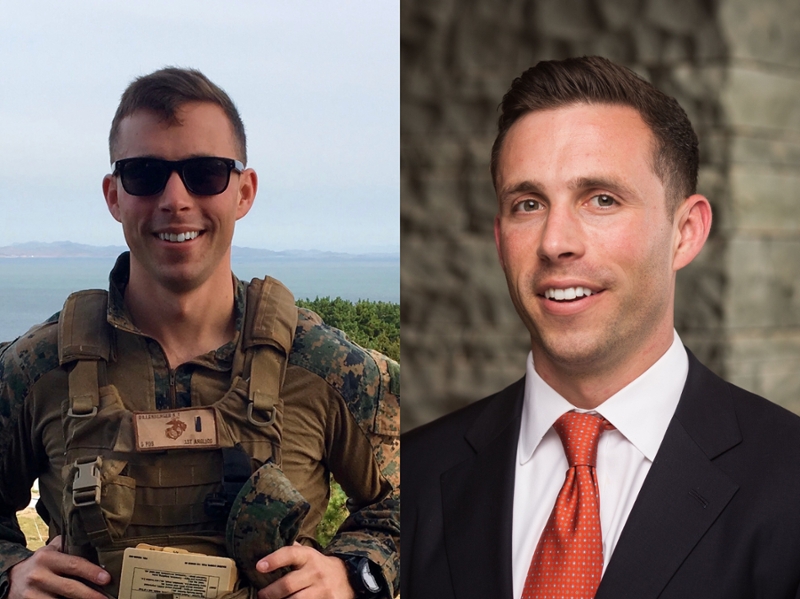 Accounting graduate and U.S. Marine Corps Captain Taylor Dillenberger ’12, M.Acc. ’13, has been accepted into concurrent master’s degree programs at Harvard University and Dartmouth College. This fall, Dillenberger will begin his pursuit of a Master of Public Policy (M.P.P.) through Harvard Kennedy School and a Master of Business Administration (M.B.A.) through the Tuck School of Business at Dartmouth.

Dillenberger joined the Marine Corps as an officer after completing his bachelor’s and master’s degrees in accounting at Samford.

Now a reservist, Dillenberger’s most recent active duty role was serving as an advanced information operations planner for a combined Navy/Marine Corps Task Force located in the Kingdom of Bahrain. His previous roles ranged from supply officer, motor transport platoon commander, logistics officer, and foreign security forces adviser, among others.

In his very first assignment as an officer, Dillenberger was tasked with managing an annual operating budget of $1.1 million. “I used a budget forecasting template that I had used for a school project and adapted it for my organization’s needs,” he said. “It went a long way towards establishing a baseline level of competence with my commanding officer. I think I even threw in some fancy terms from Dr. [Lowell] Broom’s Governmental Accounting class when I briefed it.”

He also gave a nod to the personal finance course taught by professor Jennings Marshall. “The relationships formed in the classes I took with educators like Dr. Marshall have really come in handy. To this day, that is the most useful class I have ever taken. I realized that several of the Marines in my platoon had issues handling their finances. I wanted to create a series of classes and budget templates to educate and help them make better decisions. I sent an email to Dr. Marshall for his guidance. He probably did not realize it at the time, but the content he delivered helped educate, empower and better the lives of a large group of servicemembers who he will never meet.”

After six years in the Marine Corps, Dillenberger decided it was time to make the next leap in his career. He considered several paths before settling on graduate school, even seeking out advice from his friends from Samford. “Some of my most important relationships formed at Samford were with my classmates,” he said. “Many of them have gone on to extremely successful careers in public accounting. Many of them have had client exposure to some of the most elite financial services companies in the world. As I was deciding to get out [of the Marine Corps], they were my first calls when exploring different careers. They set me up with virtual chats and made valuable introductions. Best of all, none of them have a military background, so when they were helping me prepare for interviews or reviewing my resume, they were quick to call me out for using military-specific terms or breaching unspoken etiquette rules.”

“I was lucky to have mentors in the Marine Corps who made a similar transition before me,” he said. “The common theme between the veterans I want to emulate was that they were willing to leverage their unique experiences, admit what they didn’t know, grind to get the necessary test scores, and take advantage of available support programs.”

Memorial Day 2020 was Dillenberger’s last day on active duty. Now as a member of the Marine Corps Reserves, he will serve as a Fire Support Coordinator (Artillery Officer). This commitment involves dedicating one weekend a month to drill with his reserve unit in Los Angeles, California, and a two-week annual training period in the summer.

Dillenberger’s new graduate programs will not hold classes on Fridays, and the first semester will be completely virtual due to COVID-19. He said, “Because of this, my monthly weekend commitment to the Reserves shouldn’t be a problem, but it’ll certainly require balance.”

In addition to his pursuit of two more graduate degrees and reserve commitments, Dillenberger continues to be involved as an ambassador for Service to School, a non-profit organization that provides free college and graduate school application counseling to military veterans and servicemembers.

After completing the two degrees, Dillenberger wants to work at the intersection of the corporate world and public policy. “I want to work in a role that helps governments efficiently deliver major capital projects that better the lives of ordinary citizens,” he said.

He eventually wants to own his own business and possibly return to government service at some point later in his career. “I also want to maintain my connection to helping Marines and the greater veteran community.”

“I am thankful for the ability to reach back to professors at Samford,” he closed. “This is the result of their commitment to fostering the university’s unique sense of community and commitment to lifelong learning.”