An Interview with the Author: Art Carden Discusses Leave Me Alone and I’ll Make You Rich

In this interview, Brock School of Business professor of economics Art Carden discusses Leave Me Alone and I’ll Make You Rich: How the Bourgeois Deal Enriched the World, for which he was the co-author.
In summary, the book is a refinement of economist and historian’s Deirdre Nansen McCloskey’s trilogy on the Bourgeois era. In this volume, McCloskey and Carden bring together her trilogy’s key points and arguments. It combines history, economics, literature, philosophy and pop culture and is the perfect introduction for a broad audience to McCloskey’s influential explanation of how we got rich.
The book is now 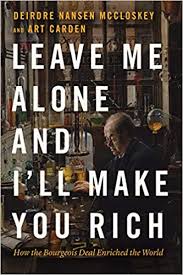