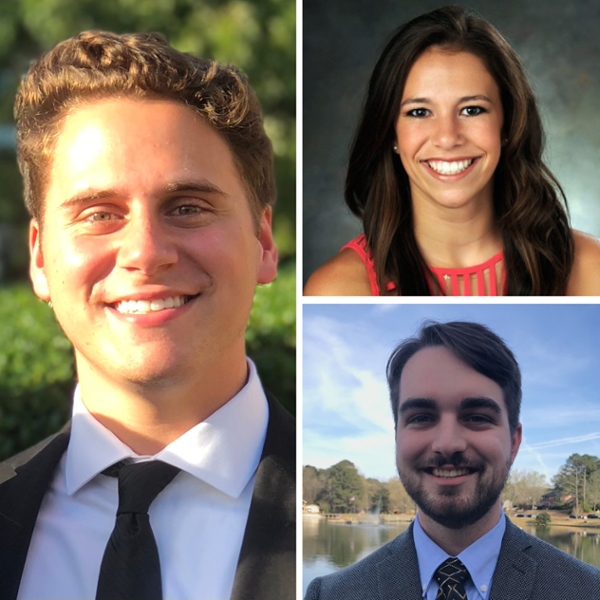 Three Samford University seniors recently completed a semester-long capstone research project analyzing the return on investment of Chick-fil-A’s three-year, multimillion-dollar sponsorship with two Alabama universities. Leaders from the restaurant’s marketing team sought out the help of Brock School of Business students to better understand the effectiveness of a partnership they have with the athletic departments from The University of Alabama and Auburn University for the “Road to the Iron Bowl” marketing campaign.
Student team members included Mallory Messer, from Mobile, Alabama, a marketing and management major with a sports marketing concentration; Jon Schinker, from Milwaukee, Wisconsin, a marketing and management major with a sports marketing and a data analytics concentration; and Samuel Leonard, from Birmingham, Alabama, a finance major with a sports marketing concentration and data analytics concentration.
To assist Chick-fil-A with evaluating the campaign’s goal to enhance brand awareness among fans of the two universities, the students spent the fall semester studying various statistical research methods and implementing the data they found in their report. The data they collected for this research was gathered through Chick-fil-A’s One app diagnostics, original survey and social media data, and secondary data provided by Chick-fil-A directly including store sales, catering data and more.
“I am thankful that Samford provided me and my teammates with this hands-on experience of working alongside Chick-fil-A executives,” said Messer, who served as the team leader. “This project allowed me to understand what makes marketing campaigns valuable as well as comparing the value of a campaign to the value of a contract.”
The students concluded that the campaign added value for Chick-fil-A stores by building upon the affinity that the fans have for the brand, and that the marketing strategy implemented through the campaign and their app is leading consumers to purchase Chick-fil-A even more than before. They also concluded that the sentiment individuals have for the brand is higher for fans than those who are not fans of the two schools.
The students presented their extensive research to the Alabama Chick-fil-A marketing committee in charge of running the partnership for Chick-fil-A corporate. Their presentation was so impressive, they were asked to present it again to the store owner/operators from the entire state of Alabama.
“It is one thing to present to a professor and other students but having the ability to present to professionals and executives of one of my favorite companies brings a new pressure and level of excitement,” Messer added. “As a senior, this real-world opportunity will be able to set me apart as I begin my job search this spring.”
“We were so grateful for the work and research they put into the effectiveness of our sponsorship,” Ashley Gill, owner/operator of the Chick-fil-A store in Northport, Alabama, said. “This data from an unbiased party allowed us to look objectively at the campaign and what the return to the restaurants has been. We would love to work with them again!”
Samford is a leading Christian university offering undergraduate programs grounded in the liberal arts with an array of nationally recognized graduate and professional schools. Founded in 1841, Samford is the 87th-oldest institution of higher learning in the United States. The Wall Street Journal ranks Samford 1st nationally for student engagement and U.S. News & World Report ranks Samford 66th in the nation for best undergraduate teaching and 104th nationally for best value. Samford enrolls 5,683 students from 47 states and 19 countries in its 10 academic schools: arts, arts and sciences, business, divinity, education, health professions, law, nursing, pharmacy and public health. Samford fields 17 athletic teams that compete in the tradition-rich Southern Conference, and ranks 3rd nationally for its Graduation Success Rate among all NCAA Division I schools.
Marketing and Communications Manager
Morgan Black
mblack3@samford.edu
205-726-4753