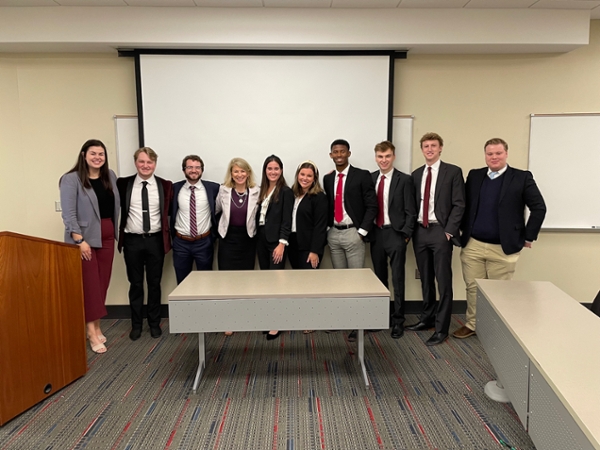 The Dreamland BBQ team pictured with Betsy McAtee, chief executive officer of Dreamland Holding Company LLC. McAtee is also a member of the Brock School of Business Dean's Advisory Board.

Over the past few years, marketing majors in Samford University’s Brock School of Business have traveled far and wide to the headquarters of such corporate giants as Nike, Coca-Cola, and the NBA to present marketing strategies developed for those companies as classroom assignments.

Teaching students through hands-on, true-to-life experiences is something Samford is good at. So good, in fact, that in 2021, the Wall Street Journal ranked Samford first in the nation in student engagement.

The semester began with an application-based process for choosing six team leaders, who then speed-interviewed everyone else in the class and subsequently chose teams of seven or eight students through a pro football-like draft.

Each team was assigned a company and the products they were to market, a competition was declared with the winning team earning an exemption on the final exam (a great motivator in any student’s book), and work began.

“The students enjoyed rolling up their sleeves and making their projects happen,” said Darin White, professor of marketing and chair of the Brock School of Business Department of Entrepreneurship, Management and Marketing. “And knowing that it mattered made a difference, too.”

Over the course of the semester, students completed competitor analyses and shelf space analyses. They looked at how the products were presented and gauged perception of those brands through consumer surveys. They also conducted brand personality studies and made suggestions for changes. And they studied how the brand is positioned in the minds of consumers and developed positioning statements.

“They also got into the more creative side of things and developed slogans and new brand logos based on positioning and brand personality research,” White said. “All that flowed into the creative development side of marketing and even got into packaging.”

At the end of the semester, the students presented their work to company executives, some of them to the “higher-ups” in their company. The Bud’s Best Cookies group, for example, presented to Bud himself, and the Milo’s group was invited to present at a corporate strategic retreat before the entire leadership team, garnering high praise from the company’s head of marketing.

The Milo’s team, incidentally, won the competition and ended the semester – as far as one course was concerned, at least – final-free.

“To be a great partner of the Birmingham business community is a huge goal of Brock School of Business,” White said. “And this project was a chance to do something positive for Birmingham businesses and them for us. It’s a win-win kind of thing. The companies heard some fresh ideas, and the students will remember presenting to those executives for the rest of their lives.”