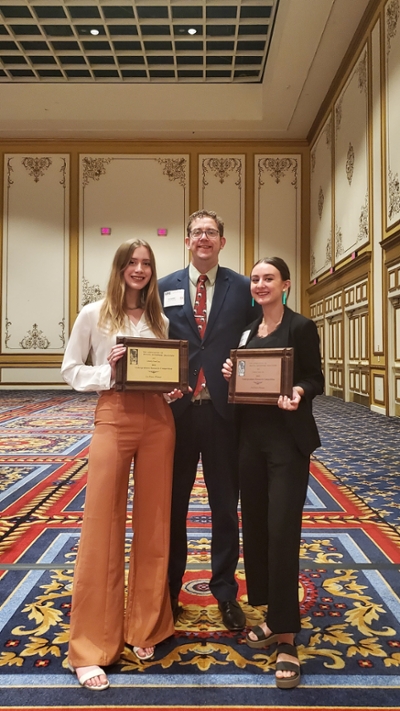 Buchanan (left) and Rennich (right) with Professor Art Carden
The Association of Private Enterprise Education (APEE) hosted its 11th Annual Undergraduate Research Competition during their conference in Las Vegas, Nevada, April 2-5, 2022. Two Samford University students, Catherine Buchanan and Sydney Rennich, won first and third place, respectively.
The competition solicited undergraduate research highlighting APEE’s focuses on the political economy, private enterprise education and free markets. Research along any topic was also welcomed.
Buchanan, a Brock Scholar from Fort Worth, Texas, was awarded first place for her research presentation titled “China’s One Belt, One Road Initiative: International Political & Economic Freedom.” Her research focused on China’s Belt and Road Initiative (BRI), a global trade route infrastructure project that began in 2013. The research examined the relationship between the BRI and economic freedom indicators of the 130 countries that are part of the project to determine China’s success in promoting economic development and the motivations behind joining the initiative. Through a series of regressions, Buchanan analyzed BRI countries’ economic freedom, size of government, legal system and property rights, sound money, freedom to trade and regulation from 2013 through 2019.
“The APEE conference was one of the highlights of my senior year and an ending note in my academic career here at Samford,” Buchanan said. “Presenting the research to fellow professors and economists was a wonderful opportunity I hope many other students in future years will be able to experience!”
With her interest in international business, Buchanan spent summer 2021 in Seoul, South Korea. While enrolled at Yonsei University, Buchanan took a course, A New Context of Chinese Foreign Policy, that she says inspired her research.
“Studying under Professor Sukhee Han greatly influenced my research and decision to pursue the topic,” she said.
During her time in South Korea, she also completed an internship for the fintech and app development company, CONCAT Inc.
Rennich, a Brock Scholar from Knoxville, Tennessee, won third place at the APEE conference for her research titled “Social Capital, Institutions, and Geographic Mobility in the United States.” Rennich’s research examined the relationship between social capital, institutions and geographic mobility in the United States to determine the forces preventing geographic mobility between socioeconomic groups. Using regression analysis, she analyzed the effect of positive social networks, encouraged by high social capital levels, on an individual’s willingness to move to neighborhoods with better opportunities, and evaluate the role of institutions in facilitating migration.
“Presenting my research at the conference was a great opportunity to hear varying perspectives and ideas on my topic,” Rennich said. “I really enjoyed all of the incredible conversations I was able to have and lessons I was able to learn.”
In addition to receiving this award, Rennich was one of six students in the nation to participate in the American Enterprise Institute’s Young Scholars Program this year, where she first defended her research.
Professor of Economics Art Carden said, “These awards recognize our students’ exceptional preparation, poise and professionalism. It’s great to see their years of training and hard work pay off with honors like these.”
Samford is a leading Christian university offering undergraduate programs grounded in the liberal arts with an array of nationally recognized graduate and professional schools. Founded in 1841, Samford is the 87th-oldest institution of higher learning in the United States. The Wall Street Journal ranks Samford 1st nationally for student engagement and U.S. News & World Report ranks Samford 66th in the nation for best undergraduate teaching and 104th nationally for best value. Samford enrolls 5,683 students from 47 states and 19 countries in its 10 academic schools: arts, arts and sciences, business, divinity, education, health professions, law, nursing, pharmacy and public health. Samford fields 17 athletic teams that compete in the tradition-rich Southern Conference, and ranks 3rd nationally for its Graduation Success Rate among all NCAA Division I schools.
Marketing and Communications Manager
Morgan Black
mblack3@samford.edu
205-726-4753