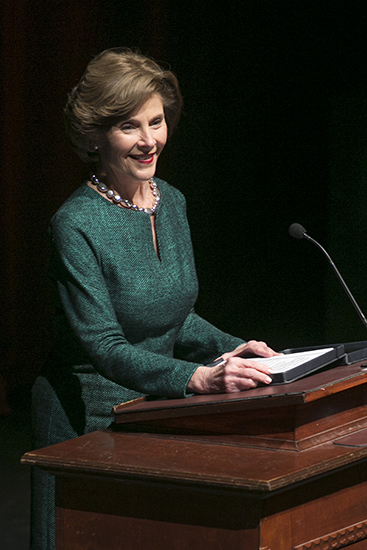 Former First Lady Laura Bush told an appreciative Samford University audience about life in the White House, current family initiatives, and her admiration for those who commit their lives to education.

The late Tom Corts, who was Samford president for 23 years, served the George W. Bush administration in areas of education after he retired from Samford in 2006.

Bush said she appreciated Corts’ belief “that every child everywhere should have access to basic education.”

She told stories, both amusing and poignant, about her White House years, and life before and after the eight-year span, including the tragedy of September 11.

Her appreciation for teachers and others who impact the lives of young people was evident throughout her speech and in a question and answer time with Samford president Andrew Westmoreland.

Bush, who holds a bachelor’s degree in education and a master’s degree in library science, spent much of her White House tenure promoting efforts related to education and literacy. She is the author of a memoir, Spoken from the Heart, in which she writes about joining one of America’s most prominent political families, life with her husband and twin daughters, and the post-9/11  period that transformed her role as First Lady.

Bush updated the audience on current projects, including initiatives at the George W. Bush Presidential Center. President and Mrs. Bush established the George W. Bush Institute to address policy issues in the U.S. and abroad, including education reform. The newest program is Presidential Leadership Scholars, a joint initiative of the presidential centers of George W. Bush, William J. Clinton, George H.W. Bush and Lyndon Baines Johnson, which brings world-class leadership training to a group of outstanding mid-career leaders from across the nation.

Mrs. Bush told charming family anecdotes and shared that the elder Bush family members, George and Barbara, are doing well. “They are showing us how to age with grace,” she said.

Several comments were especially popular with the Samford audience, including one noting that she was at “Sam not Stan,” a popular campus phrase that differentiates it from a school with a similar name on the west coast.

The crowd of about 1,300 in Wright Center included some 300 Samford education majors, who received applause when asked to stand by their dean Jeanie Box. “We are proud of our students and Samford’s 100 years of preparing teachers, school leaders and graduates who work with families in their communities,” Box said.

After the event, several education students reflected on the evening.

Karen Teel, a sophomore from Wetumpka, Alabama, said she especially appreciated Bush’s comments about educational leadership, a subject dear to her since her parents are teachers and a grandparent serves on the local board of education.

“I like what she said about good schools having good leaders,” said Teel, adding that she is eager to know more about the Bush Institute.

Mary Gates, a sophomore from Fort Walton Beach, Florida, who also has educators in her family, said she has always admired Laura Bush.

“I have always paid attention to what she stands for, and admire that she is a light for teachers.  I would have loved to have sat down around a table with her and talked,” said Gates. “I loved that she told how books have power and that every student deserves to have a chance for an education.”

She was delighted at Bush’s talk and the warm response from the audience.

“It was a momentous occasion for Samford and especially for the school of education as it celebrates 100 years of training teachers,” said Corts.  “Laura Bush was the perfect choice to mark their centennial year.”

Bush, she said, spoke with candor, wit, authenticity, grace and compassion. “Her love of books, her passion for reading and basic education, and her personal account of the magical teacher/student connection was an inspiration.”

The former First Lady was introduced by 1996 Samford graduate Eric Motley, who worked in the George W. Bush administration and is now vice president of the Aspen Institute and executive director of national programs.

The education school’s 100th anniversary celebration will continue this year with a student-led birthday observance this spring and a centennial scholarship dinner in the fall.