Samford Education Alumna Encourages a “Life on the Edge” 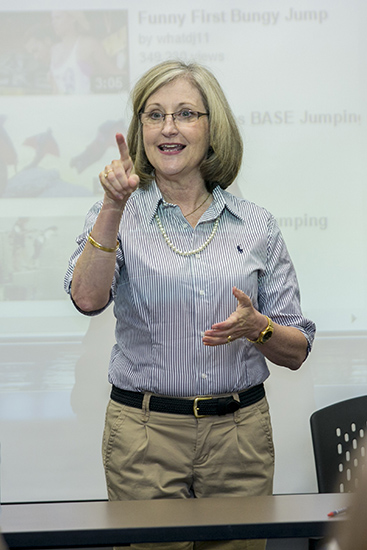 Samford University alumna Jennifer Pigg Carroll told an engaged audience about her time at Samford, her work in Africa, and encouraged the audience to join her in living life on the edge.

A 1978 graduate and founder of the Elizabeth Project International, Carroll spoke April 22 as part of the Orlean Bullard Beeson School of Education’s 100th anniversary celebration.

She told about her time at Samford as a history major, Chi Omega, and cheerleader, and the path that led her to becoming a missionary in Kenya for more than 30 years, where she says she’s lived life on the edge.

“Living life on the edge doesn’t mean you don’t realize the risk,” Carroll said. “It means what you choose to do is worth the risk.”

She encouraged the audience, mostly comprised of Samford students, to figure out what they believe, what they love, and what their dream is. She explained the answers to these questions can help determine how one will live with purpose and satisfaction.

The education school’s 100th anniversary celebration will continue this year with a centennial scholarship dinner in the fall.