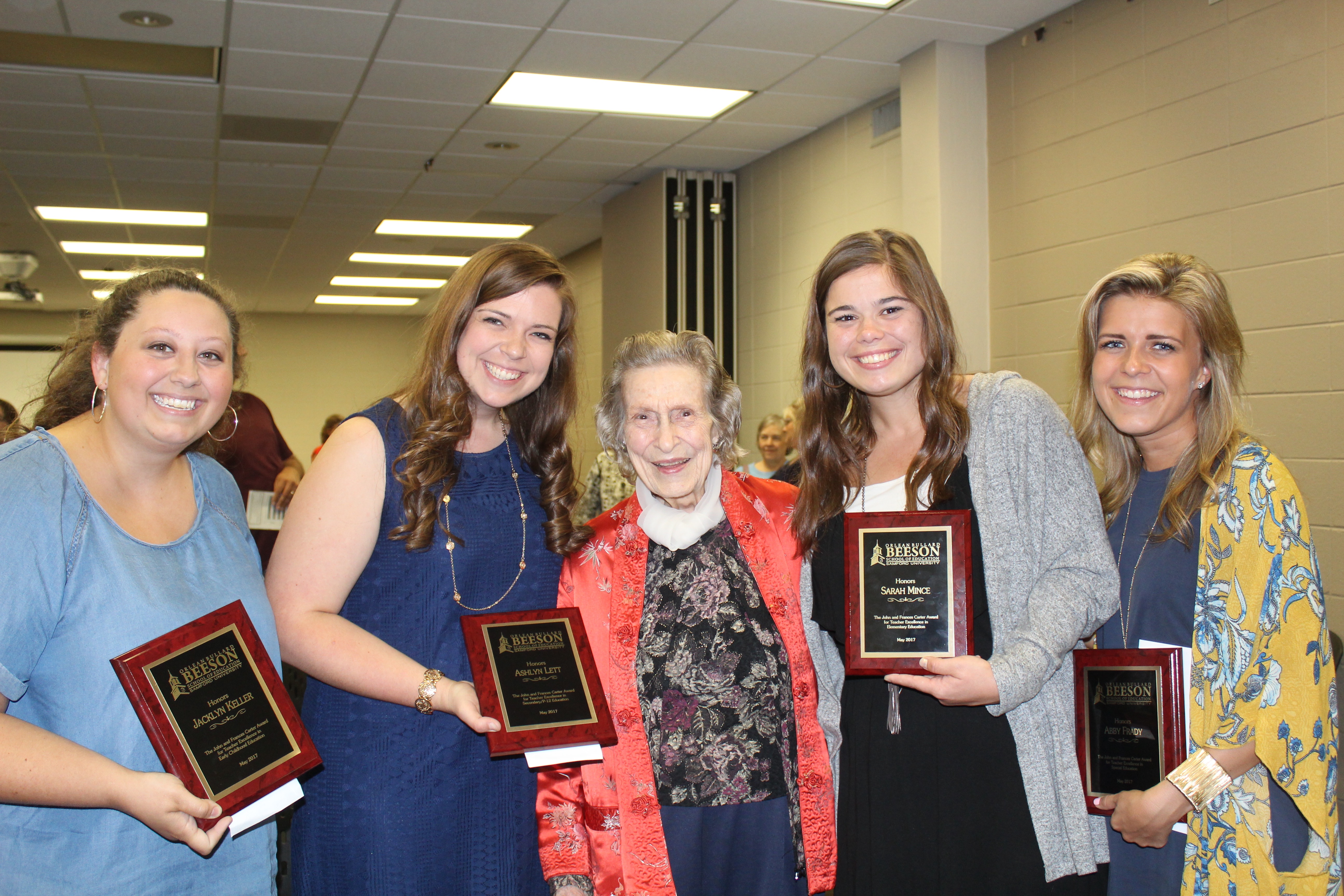 Samford University’s Orlean Beeson School of Education held its 36th annual award ceremony May 4 to recognize the many accomplishments of the school’s undergraduate teacher education students. Twelve scholarships totaling more than $35,000 were awarded to students pursuing a career in teacher education.

“Our students come with a passion to pursue their calling as educators,” said Sheri Ransome, advancement officer for the education school. “For many of these students, their Samford experience would not be possible without the generosity of our donors. Gifts to support scholarships allow our students to succeed in the classroom and go forth to positively influence and shape society.”

Catherine Frances Campbell, a sophomore from Northport, Alabama, received the Velma Wright Irons Memorial Scholarship, which is awarded to a student who has exemplified strong goals toward pursuing a career in education.

Emily Beroth, a sophomore from Valencia, California, received the Kathryn Abercrombie Scholarship, which recognizes a student who has achieved a high academic standing and exemplified outstanding character in the field of education.

Angela Napolitano, a junior from Daphne, Alabama, was awarded the Cooper and Dark Endowed Scholarship. This scholarship is made possible through the generosity of Edwin W. and Billie B. Bleier, who give in memory of their aunt and uncle, Jo Cooper and Henry W. Dark. Both Cooper and Dark served as teachers throughout their professional careers.

Mary Michael Jaquess, a junior from Daphne, Alabama, received the Alabama Power School of Education Endowed Scholarship, which was given in honor of Rev. Terry W. DeFoor.

Maggie Hohfeler, junior from Coppell, Texas, was awarded the Anne Glaze and William C. Stone Scholarship, which was established in memory of Charles R. Glaze and to honor Ila G. Glaze.

Several academic awards were presented at the event as well.

The Martha B. Ralls Most Promise as an Exemplary Teacher recipients were seniors Alan Lane from Alpine, Alabama, and Grey Adams Fairhope, Alabama.

The Most Promise to be a Teacher Leader recipients were seniors Ellie Knox from Murfreesboro, Tennessee, and Mattie Newson from Charlotte, North Carolina.

Abigail Hancock, a senior from Roswell, Georgia, won the Kappa Delta Pi, Zeta Theta Chapter Award for Excellence in the Field of Education.

Dean Jeanie Box presented the Education Dean’s Award to senior Lauren Hughes from Fultondale, Alabama. “She has shown superior performance throughout her time in the Teacher Education program,” said Box. “Her professors describe her as a natural leader, encouraging of others, always prepared, willing to go the extra mile and outstanding in all ways.”

Box also presented the 2017 Golden Apple Award to Lauren Lunceford from Vestavia Hills, Alabama. The Golden Apple is presented annually to an outstanding alumni educator who has shown excellence in and outside the classroom since graduation.

Lunceford completed her undergraduate degree and master’s in gifted education at Samford. She teaches second grade at Cherokee Bend Elementary and was recently named their Teacher of the Year. Additionally, she is involved in supporting education efforts in Uganda.

Guest speaker and alumna Alyssa Barnes, an early intervention teacher, encouraged students to reach beyond their comfort zones as they move forward in their careers. “Don’t stay somewhere because you are comfortable. Step outside your comfort zone and take a risk. That is where the magic happens,” said Barnes.

“Awards Night is such a special evening,” said Karen Birkenfeld, teacher education department chair, “As faculty, we feel blessed to be able to recognize all of our exceptional teacher education students and their accomplishments surrounded by their family, friends and peers.”
Marketing and Communication Manager
Leighton Doores
ldoores@samford.edu
205-726-4751