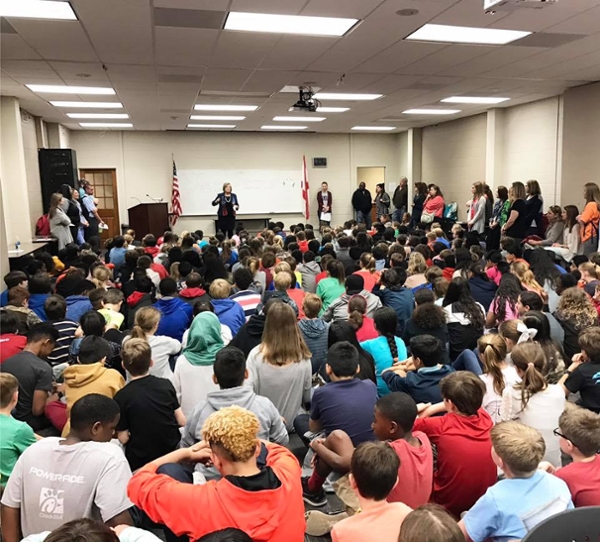 Dr. Newton began the day with an interactive exercise to help students understand why it is important that they start thinking of college at such a young age. During the interactive exercise, students were asked to imagine they were planning a trip to Buffalo, New York.

“What might you need on this trip?” said Newton. Raised hands filled the room, “Clothes and food,” said one student, “A car!” answered a second. Students worked together, bouncing ideas off one another to compile a list of what they would need to get to Buffalo.

The last student’s answer helped connect the dots between Buffalo and college, “If we have a car, we might need to know how to drive it.”

Newton explained that planning a trip was a lot like planning for college, because a foundation is needed. “Just like you would need to learn to drive a car before driving to Buffalo, you will need to have the grades, skills and work ethic to get to college and thrive once you get there,” said Newton. “Your experience will be better if you plan ahead; set goals and don’t be afraid to reach.”

The idea of planning ahead was exactly why Ashee Webster, Simmons sixth-grade school counselor, reached out to the education school for the tour. “I wanted them to have this experience so they could see that the grades they are making right now matter,” she said. “I believe it is important for them to have this tangible experience so they can have the mindset of ‘Okay, I can get there,’ starting now.” If sixth graders can have this goal in mind now, “just think how it may affect the years down the road.”

Samford students from the junior leadership team planned the second half of the day. Simmons students gathered small groups and headed outside to explore campus. The leadership team created a scavenger hunt to help make the tour more interactive. Students were given clues to help them find the library and cafeteria, and to lead them through many of the buildings on campus. The clues even led the groups to Ralph Beeson’s statue for selfies.

“The hunt helped the sixth graders see the campus and how a college classroom looks, but it also helped the ESEC students stretch their creativity,” said Dean Box. “It gave the Samford education students an opportunity to plan, implement and assess an event while making it exciting for the young students.”

Samford’s nationally recognized ESEC program is designed to prepare students to teach a wide age range of children in a variety of grades. In fact, students enrolled in this program can graduate with four teaching certificates: early childhood education, elementary education, early childhood special education and elementary collaborative teacher. Graduates are qualified to teach kindergarten through sixth grade. Many ESEC students who previously thought they would want to teach early childhood age were surprised by how much they enjoyed working with the sixth-grade Simmons students.