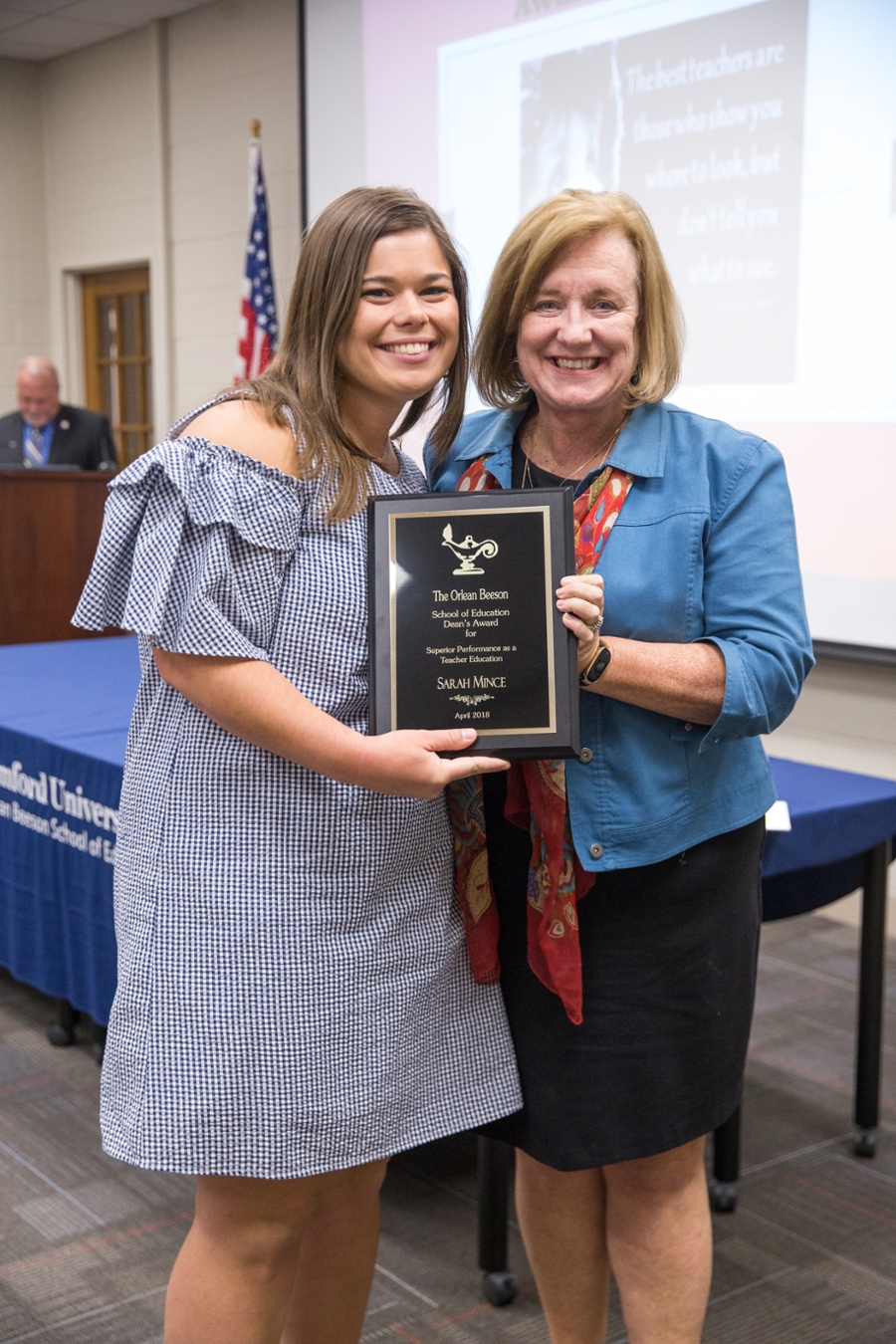 “We are deeply grateful for the generosity of our donors,” said Sheri Ransome, advancement officer for the education school. “Our teacher education students come with a passion to pursue their calling as educators. These scholarship gifts make the Samford experience possible for our students and extends our mission of empowering them to succeed in the classroom and go forth to positively influence and shape the world.”

Guest speaker and alumnus Matt Kiser, encouraged students to recognize the importance of relationships with all stakeholders. “Research shows that one positive role model can change the trajectory for a student. I challenge you to be that one,” said Kiser.

Mildred (Joyce) Bousack, a junior from Sylvan Springs, Alabama, received the Velma Wright Irons Memorial Scholarship, which is awarded to a student who has exemplified strong goals toward pursuing a career in education.

Hannah Baker, a senior from Colleyville, Texas and Mallory (Nicole) Payne, a senior from Madison, Alabama received the Kathryn Abercrombie Scholarship, which recognizes a student who has achieved a high academic standing and exemplified outstanding character in the field of education. Mallory Payne was also awarded the Anne Glaze and William C. Stone Scholarship, which was established in memory of Charles R. Glaze and to honor Ila G. Glaze.

Caroline Dymond, a freshman from Pike Road, AL and Jessie Gholson a junior from Nashville, Tennessee were awarded the Cooper and Dark Endowed Scholarship. This scholarship is made possible through the generosity of Edwin W. and Billie B. Bleier, who give in memory of their aunt and uncle, Jo Cooper and Henry W. Dark. Both Cooper and Dark served as teachers throughout their professional careers.

Colby Kuhn, a junior from Knoxville, TN was awarded the Brookwood Baptist Nila Graham Campbell scholarship. The scholarship is awarded to a deserving undergraduate student, with preference given to those students pursuing a degree in Early Childhood Education.

Several academic awards were presented at the event as well.

The Martha B. Ralls Most Promise as an Exemplary Teacher recipients were seniors Macy Sarver from Saint Petersburg, Florida and Sally Stunkel from Boynton Beach, Florida.

The Most Promise to be a Teacher Leader recipients were seniors Jacklyn Keller from Vinemont, Alabama, and Ashlyn Lett from Pell City, Alabama.

Mallory Killam, a senior from Pensacola, Florida, won the Kappa Delta Pi, Zeta Theta Chapter Award for Excellence in the Field of Education.

Associate Dean Jodi Newton presented the Education Dean’s Award to senior Sarah Mince from Vestavia, Alabama. “She has shown superior performance throughout her time in the Teacher Education program,” said Newton. “Her professors describe her as a natural leader, encouraging of others, always prepared, willing to go the extra mile and outstanding in all ways.”

Newton also presented the 2018 Golden Apple Award Lindsay Wiseman Self of Brentwood, Tennessee. The Golden Apple is presented annually to an outstanding alumni educator who has shown excellence in and outside the classroom since graduation.

Self completed her Bachelor of Science degree in Early Childhood, Special Education, Elementary, Elementary Collaborative (ESEC) at Samford. She is a special education instructor at Fultondale Elementary and was recently named a Top 5 Finalist for Jefferson County Teacher of the Year.

“I am honored to receive this year’s Golden Apple,” said Self. “The future of education is bright with talented future teachers, like those from Samford, insisting on innovation and always aiming to do what is best for students.”

Following the awards ceremony, education faculty, staff, scholarship recipients and scholarship donors gathered for an appreciation reception for fellowship and to celebrate the many accomplishments of our students this academic year.