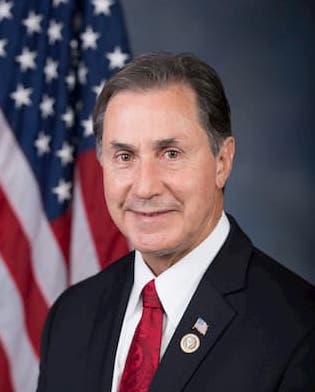 Congressman Gary Palmer, an Alabama native representing Alabama’s 6th Congressional District since 2015, served as this year’s commencement speaker. As the first in his family to graduate from college, Palmer knows the value of an education and charged graduates with leading “the way in passing on the values and principles that are essential for the survival of this nation.” He encouraged students to not think of their role as an educator teaching young people how to make a living, but “to also educate them about how to make a difference.” Palmer concluded his address with a final message, “God bless you as you leave here to do the great work He has prepared you for—to educate, lead and serve for the good of our country and to God’s glory.”

Reflecting on the mission statement of Orlean Beeson School of Education to enrich the community and empower its students to educate, lead and serve, Palmer shared, “Servant leadership must be taught because it is a trait that is unnatural and in conflict with all that our modern culture values most. For such a trait to be passed down, it has to be valued first and foremost in our families and in our homes, but also supported and reinforced in our classrooms.”

After graduating from the University of Alabama with a bachelor’s of science degree in operations management, Palmer worked in the private sector for 12 years before his involvement with Focus on the Family lead him to start the Alabama Family Alliance. This later became the Alabama Policy Institute, where he served as president for 24 years. In 2014, he was elected to the 114th Congress.

“The future generations of Americans who will pass through your classrooms need the very best from you,” said Palmer. “They need honesty about our past, but also a vision and hope for our future. I realize that this is a tremendous challenge, but as graduates of the Samford University’s class of 2020 you are among the best equipped to meet it.” Palmer closed by sharing scripture from Luke 12:48 “unto whom much is given, much is required.”

In addition to Congressman Palmer’s commencement speech, the ceremony included a welcome from President Andrew Westmoreland, invocation from Patricia Terry, professor in the School of Public Health, and benediction from Provost and Vice President of Academic Affairs Mike Hardin.

Orlean Beeson School of Education Dean Anna McEwan offered words of encouragement to graduates and a congratulations to Charlotte Freeman, a retiring professor after a 47-year tenure. “Oh, that we all might aspire to live with Dr. Freeman’s dedication and purpose. Many congratulations on your retirement.”

Since graduating in May, Orlean Beeson School of Education graduates have plans this fall to teach missionary children in Uganda, join Reformed University Fellowship at the University of Texas at Tyler, teach kindergarten in Birmingham City Schools and serve as the Director of Children for the Women’s Prison Project of an NGO that supports a women’s prison in Central Asia.