Published on September 2, 2020 by Leighton Doores   Share this on: 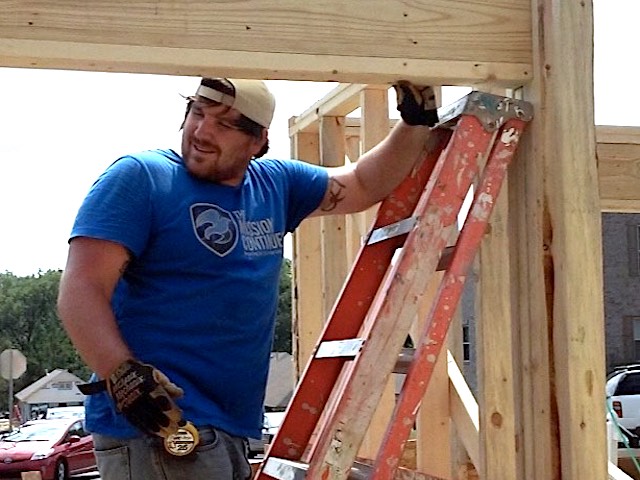 Patrick Johnson never imagined that in just six years he would go from homelessness to establishing a non-profit, starting a business, being accepted into two entrepreneurship programs and be in the process of completing his master’s degree.

For Johnson, a current graduate student in Orlean Beeson School of Education’s K-12 collaborative special education program, the road to where he is today has been marked by challenges. In 2014, Johnson was homeless and suffering from a traumatic brain injury he didn’t know he had that he sustained while serving in the military. Today, Johnson works to offer support to veterans who are dealing with the same struggles he had experienced, a goal he’s incorporating into his master’s degree curriculum.

Johnson founded the Homeless Veterans Initiative of Alabama in 2017, a 501(c)(3) dedicated to advocacy and peer support for homeless veterans in the greater Birmingham area. He then shifted his focus to the Veterans Farming Initiative, a pilot program he founded that connects veterans with agribusiness opportunities while providing therapeutic experiences on the farm and opportunities to give back to the community. This grew out of Johnson’s passion for agriculture and nature as he discovered those two things brought him solace during his difficult season after serving in the military.

Johnson has been accepted into two competitive veteran entrepreneurship programs. The first, Entrepreneurial Bootcamp for Veterans with Disabilities through the Institute for Veterans and Military Families, provides training and mentorship to veterans wanting to start a business. Johnson saw this as an opportunity to further develop the Veterans Farming Initiative. He will present his business plan in a pitch competition in Philadelphia this fall for the chance to win funding for his business.

Johnson was also selected, for the second time, to be part of the Service Leadership Corps, a six-month fellowship program through The Mission Continues. Upon completion, he will be equipped to be an effective member of a platoon leadership team focused on making an impact in underserved communities.

With the help of his professors at Samford, Johnson found a way to incorporate these veteran entrepreneurship opportunities into his curriculum for his master’s degree. This fall, he will be coaching football in an underserved community and interacting with kids with special needs as part of Service Leadership Corps, while also completing some of his observational hours for Samford.

This willingness to work with Johnson and help him reach his goals is one of the reasons he chose Samford.

Johnson wanted to take his passion for teaching and mentoring kids with emotional or behavioral issues that he discovered he had when coaching football and turn it into a career. Upon completing his degree, Johnson plans to take the Veterans Farming Initiative business model and apply it to his special education classroom. He dreams of providing agribusiness opportunities to students with special needs to help bridge the gap between graduation and entering the work force.

Professor of Special Education Mandy Hilsmier has taught Johnson and believes he will have no trouble achieving his dreams because of his perseverance and personal responsibility.

“He did not use his traumatic brain injury as an excuse, but a motivator,” said Hilsmier. “He saw an opportunity to improve his life and the lives of others and kept working. Patrick advocates for his academic needs, but also works hard to overcome those needs. When dealing with a disability, advocacy will always be more successful than excuses.”

Johnson is grateful for the challenges he has faced as it has given him the opportunity to give back to fellow veterans and students with disabilities. The experience he has gained will be vital as he balances being a teacher, an entrepreneur and a father.

“I’ve learned a lot, and I would never change it,” said Johnson. “I don’t think I would appreciate what I have now had I not gone through the experiences in the military, being homeless and my transition and recovery. I just want to help others now, and I’m a firm believer that if given the chance, people rise to the occasion.”