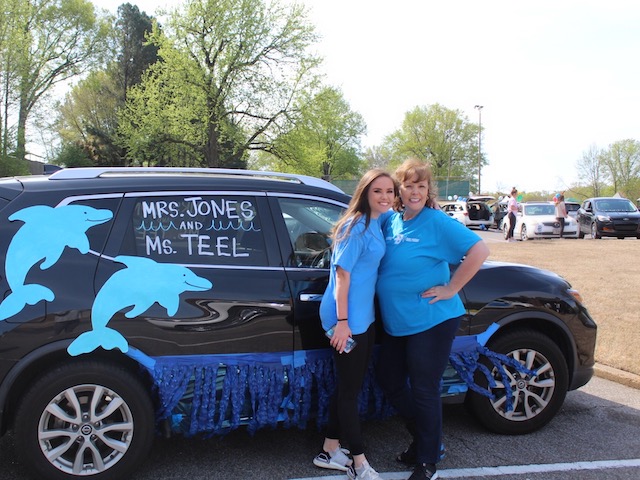 One weekend in late March, gifted education teacher Karen Teel and her colleague and roommate, Donna Jones, drove around various neighborhoods in Germantown, Tennessee, mapping different routes. This was not in their typical job responsibilities, but, as with most teachers, they were going above and beyond.

After COVID-19 forced schools across the state to temporarily close, Teel’s principal at Dogwood Elementary mentioned wanting to find a way to connect with the students. In response, Teel proposed, organized and led a teacher parade around the neighborhoods where most of the school’s students lived.

Teel, a 2017 alumna of Orlean Beeson School of Education’s teacher education program, spent several weekend and evening hours planning the parade. After obtaining a population map, she was able to determine the neighborhoods where most of the students lived and map a route that would allow them to efficiently pass by the most students. She drove the route several times and wrote down turn-by-turn directions for the other teachers and staff members.

On the morning of April 1, 70 decorated cars lined the streets ready to parade around to the homes of Dogwood Elementary students. The parade lasted two hours with Teel’s car taking the lead. As the teachers would drive by the students’ houses honking in their decorated cars, the kids would run around and hold up signs they had made. Many families were in lawn chairs in the yard, with some getting creative by drawing chalk murals on fences and holding up giant stuffed animals dressed in the school’s gear.

However, students and families of Dogwood Elementary weren’t the only people impacted by the parade.

“We saw a lot of elderly people and other people in the community who were not students’ parents and had no relation to the school who were moved by the gesture,” said Teel. “It was fun to be encouraging in the community outside of just our students and our families too.”

The unexpected school closure was hard on everyone, and at first, this parade just seemed like another item on the to-do list for the teachers. However, it turned out to be the encouragement they didn’t know they needed.

“Everyone was just completely humbled by the experience,” said Teel. “A ton of teachers told us, ‘I didn’t know how much I needed that until we were doing it and I got to see my kids’ faces.’”

Many were overwhelmed by the face-to-face connection, even from a distance, and were brought to tears. The parents were moved to see how excited their kids were and how they had been looking forward to it all week. In a time of difficult transition and uncertainty, Teel believes the parade served to remind parents and students that the faculty and staff of Dogwood Elementary were still there to support them.

“Just seeing each other was a reminder that we’re all still here and we’re all still on the same team wanting the best for their kids. It was a very special experience for everyone involved.”