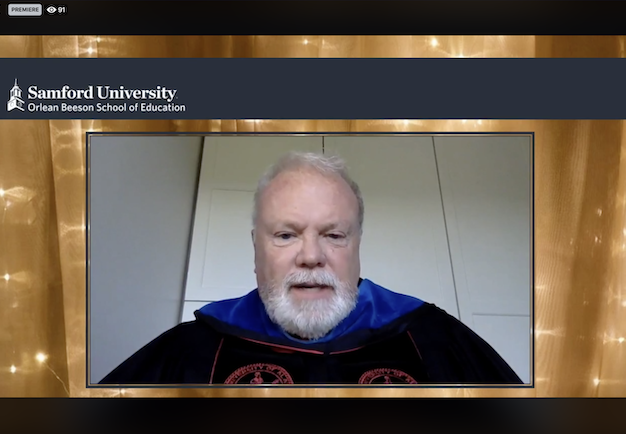 The Department of Teacher Education in Orlean Beeson School of Education virtually hosted The Golden Apple Awards on May 7. This ceremony, modeled after the Golden Globes, was to recognize award and scholarship recipients and honor graduating seniors. It included faculty members dressed in festive Hollywood attire, humorous commercials and professor David Finn serving as the master of ceremonies.

The guest speaker was a beloved member of the Orlean Beeson School of Education faculty, Charlotte Freeman, who is retiring this school year. Freeman joined the faculty in 1973 and has served in various roles through the years, but none she loved more than being a teacher.

As the ceremony entered into the awards and scholarships presentation, faculty members took turns presenting for the Early Childhood, Special Education, Elementary, Elementary Collaborative (ESEC) program and the Secondary and P-12 program.

Caroline Dymond was given the Brookwood Baptist Nila Graham Campbell Scholarship, which is awarded to a deserving undergraduate with preference given to those students pursuing a degree in early childhood education.

Hayle Earle received the John and Frances Carter Endowed Scholarship for Teacher Education which is awarded to juniors or seniors who are enrolled in a certification program for teacher education.

The Velma Wright Irons Memorial Scholarship was awarded to Natalie Beeler, which is given to an education major who has a strong goal toward pursuing a career in education.

Anna Berent and Sarah Binder were selected to receive the Kathryn Abercrombie Scholarship, which recognizes outstanding students with high academic performance and character.

Rose Tarwater received the Bill and Pam Smith Family Foundation Scholarship which is awarded to a student pursuing a career in elementary education with a preference given to those with a passion for teaching mathematics and science.

The Alabama Power School of Education Endowed Scholarship was awarded to Julianna Smith in honor of Rev. Terry W. DeFoor for his service to the Baptist ministry and support of education.

Melanie Kay was selected to receive the Anne Glaze and William C. Stone Scholarship, which was established in memory of Charles R. Glaze and to honor Ila G. Glaze.

The Ms. Jewell Scholarship, which seeks to demonstrate what the Lord will do for the recipients whose hearts and minds are dedicated to loving and serving the Lord, was awarded to Caroline Dymond.

Maggie Greene was awarded the James H. Endowed Scholarship given by Jean Daughtry Williams in memory of her late husband James H. “Jim” Williams. This scholarship was established to assist worthy students in their effort to acquire a Samford education.

Dean Anna McEwan presented the Orlean Beeson School of Education Dean’s Award to Abigail Hawkins. This award is given to a deserving senior who has shown superior performance in teacher education throughout their entire time in the program.

McEwan also presented the Golden Apple Outstanding Alumni Award to Haley Brown. This award is presented each year to an outstanding young alumni educator who has shown excellence in and outside the classroom since graduation. Brown graduated from Samford in 2013 with her Bachelor of Science degree in Early Childhood, Special Education, Elementary, Elementary Collaborative. She returned in May 2016 to complete her Master of Education in elementary education and now has seven years of experience in the classroom at Trace Crossings Elementary in Hoover, AL.

After all awards and scholarships were presented, the senior class of 2020 was celebrated with a photo slideshow. Each senior was featured and shared their favorite scripture, favorite memory, what they’ve learned or words of gratitude to their peers and faculty. The ceremony ended with words of encouragement and congratulations from faculty members.

“Despite difficult circumstances, you have shown flexibility, extended grace to your faculty and to your colleagues and demonstrated excellence in the Samford tradition,” said Finn. “So we salute you, on behalf of the faculty and staff at Samford, we wish each of you and your families a wonderful and safe summer.”