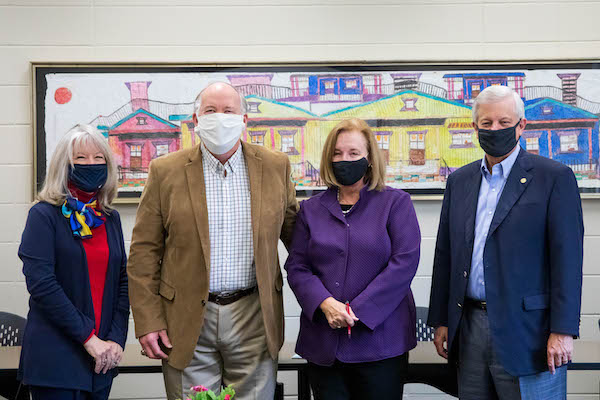 Jodi Newton has taught as full-time faculty in the educational leadership department since 2008. She previously served as the associate dean of Orlean Beeson School of Education, director of doctoral programs and interim chair of the teacher education department. Prior to coming to Samford, she served as the superintendent for Homewood City Schools for more than 10 years and as an assistant superintendent for both Homewood City Schools and Fairfield City Schools in Birmingham, Alabama.

Bob Newton attended Samford University as an undergraduate and spent 36 years teaching and coaching students in Cobb County, Georgia, and Homewood City Schools. He had a successful coaching career, won five state championships, was inducted into the Alabama High School Coaches Hall of Fame and received the Lifetime Achievement Award from the Alabama Football Coaches Association.

Bob and Jodi Newton believe helping students develop good character is a gift as it can propel them to succeed in all areas of school and life. They hope this endowment encourages and supports faculty and alumni work surrounding the character development of students.

“Students with good character are going to better excel in all areas,” said Jodi Newton. “They are frequently better behaved, stronger academically, better group/team participants and become better people. I have learned that you do not have to be perfect to promote good character in students, but you do have to care. You have to try to model good character. Educators invested in us along the way, and Samford invested in us. We have tried to invest in our students and make a difference for them. We hope to promote that in all schools.”

Character education is woven into the fabric of the mission of Orlean Beeson School of Education because it enriches and empowers students to educate, lead and serve in their communities and the world. The school strives to develop both professional competence and strength of character while preparing graduates to fulfill their calling.

Orlean Beeson School of Education Dean Anna McEwan believes this endowment will allow the school to pursue opportunities to enhance character education that might not be possible otherwise.

“The importance of endowments like these cannot be overstated,” said McEwan. “They are vital in helping us pursue our highest priorities, including character education. We are tremendously grateful for the generosity of the Newtons that will allow us to continue fulfilling our mission to enrich the community and empower our students to educate, lead and serve.”

Click here to donate to the Bob and Jodi Newton Endowment for Character Education.