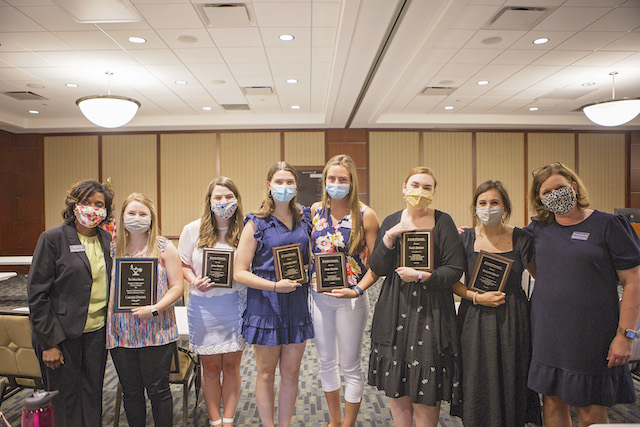 Samford First Lady Jeanna Westmoreland served as the guest speaker. Westmoreland has an active 25-year career as a teacher, university educator and administrator and serves as a member of the dean’s advisory board. She encouraged candidates to “give thanks, and take nothing for granted” after successfully navigating a year full of unexpected challenges.

After sharing the words of Jonas Salk, the creator of the life-saving polio vaccine, who said “The reward for work well done is the opportunity to do more,” Westmoreland challenged candidates to use these awards as motivation.

“As award recipients I hope the recognition and appreciation you receive today will provide you with one more building block in the foundation upon which you are building your life and your career, one that gives you the confidence to challenge yourself to work harder, think sharper and love stronger with the knowledge that you can achieve success.”

In addition to academic awards, ten named scholarship funds awarding more than $38,000 were awarded to 19 students pursuing a career in teacher education.

Kellum Key was given the Brookwood Baptist Nila Graham Campbell Scholarship, which is awarded to a deserving undergraduate with preference given to those students pursuing a degree in early childhood education.

Abigail Hanby received the John and Frances Carter Endowed Scholarship for Teacher Education which is awarded to juniors or seniors who are enrolled in a certification program for teacher education.

The Velma Wright Irons Memorial Scholarship was awarded to Brianna Ward, which is given to an education major who has a strong goal toward pursuing a career in education.

Ansley Reese and Rose Tarwater were selected to receive the Kathryn Abercrombie Scholarship, which recognizes outstanding students with high academic performance and character.

The Raymond Christian Scholarship is awarded to a student preparing for service in public education either as a teacher, counselor or administrator. Ashlyn Hamrick was presented with the award.

Sarah Howe received the Bill and Pam Smith Family Foundation Scholarship which is awarded to a student pursuing a career in elementary education with a preference given to those with a passion for teaching mathematics and science.

The Alabama Power School of Education Endowed Scholarship was awarded to Julianna Smith in honor of Rev. Terry W. DeFoor for his service to the Baptist ministry and support of education.

Layne Peterson was selected to receive the Anne Glaze and William C. Stone Scholarship, which was established in memory of Charles R. Glaze and to honor Ila G. Glaze.

The Dean’s Award is given to a deserving graduating senior who has shown superior performance as a teacher education major throughout the entire program. This award was given to Caroline Dymond.

The Golden Apple Award is presented each year to an outstanding young alumni educator who has shown excellence in and out of the classroom since graduation. This year’s award was presented to Andrew Jackson, recently named the 2020-2021 Alabama Teacher of the Year, who encouraged candidates to be an advocate for their students and persevere.

“Don’t give up on those kids, they need you,” said Jackson. “You may be the only advocate who stands for that child. Don’t be afraid. God has used many people throughout history, some who were younger, some who felt they weren’t ready. You’re ready. You’ve been trained by the best because you went to Samford.”

“Servant leadership begins with making ourselves available to the Lord,” said Williams. “He makes us usable, and as undershepherds, we understand that this is the most effective way to lead and it’s the most rewarding way to lead other people.”