Published on September 17, 2021 by Leighton Doores   Share this on: 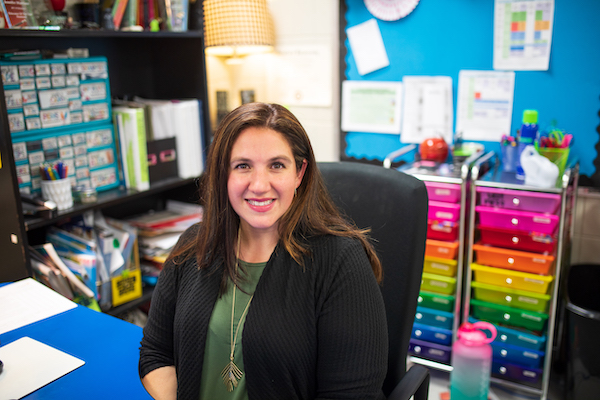 This past year, Jennifer Martinez ’17 was awarded Teacher of the Year at Chelsea Park Elementary School. As a fourth-grade teacher, she had known for years that she wanted to work in the classroom, but her pathway to becoming a teacher was an untraditional one.

In 2003, Martinez graduated from the University of Alabama at Birmingham with bachelor’s degrees in psychology and Spanish. She spent the next 13 years working in a variety of roles, including counseling and translating. Each position gave her the opportunity to work with children, but she had a desire to do more.

Growing up, Martinez had teachers who went above and beyond caring for their students. It was this example that inspired her to enter the profession herself. She began to teach at the preschool level, working with four-year-olds, which she did for 14 years. Finally, she decided to return to school to earn her master’s degree and teaching certificate.

"Samford's hiring rate was the best in surrounding schools, and knowing that I would be able to finish the program quickly was a huge bonus," Martinez said.

She said she felt very prepared to enter the classroom after graduating because of the amount of experience the program offered. "They had us in the classroom quite often. They really challenged you and made you think outside the box," she said. "It set me up for success in so many different ways; I was more than prepared."

Martinez credits her professors with helping her along the journey and being actively involved in wanting her to be successful. "I was able to go above and beyond in that training, and it set me up for success so that I can do my dream now," Martinez said. "The first place that I interviewed, I was able to get the job and be exactly where I wanted to be."

Now as an alumna, Martinez says she still feels connected to the university. “I still feel like I am part of the Samford family, whether it's family activities or any support that I need from previous professors. In my first year after graduation, I spoke quite often with Dr. Little about different opportunities, and I still have those relationships if I ever need help," Martinez said.

"I went into teaching because I knew it is God's calling for me even though I tried to run away from it through different careers," she said. "I had the love and passion for teaching, but Samford supplied the skills and academics I needed not only to live my dream of teaching but to succeed. Their ongoing support gave me the confidence I needed to become the teacher and leader I am today."

Martinez she says she has plans to continue her education, possibly earning another master's degree or an Ed.S in the coming years.